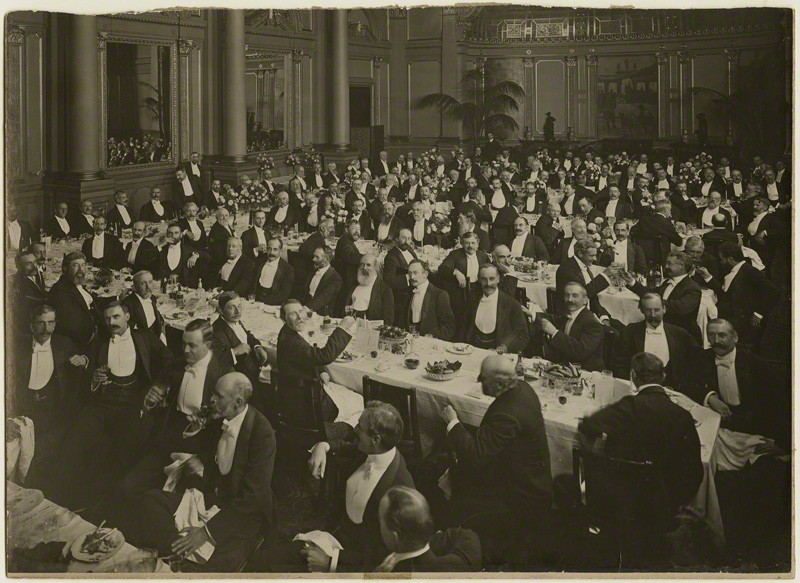 The Alma-Tadema Banquet in 1899, with Alma-Tadema himself standing at the top table to the left

The Victorian era, an age of enormous prosperity and consumption among the British middle classes, saw the development of a newly flourishing art market as British society’s attitudes towards the arts shifted significantly. From the 1850s to the late 1880s, the “golden age” of British art, the act of collecting contemporary art came to signify one’s elevated social status; as a result, artists of this time received unprecedented financial rewards for their works, enjoying a rise in their social status to one of a celebrity. Constant press coverage, including interviews and articles illustrated with portraits or photographs of the artists themselves, also played a crucial role in maintaining these artists’ social popularity and professional success; artists began to recognize the importance of cultivating a public persona in order to distinguish themselves among potential patrons, resulting in “their great success in selling themselves as proper English gentlemen.”[1]

This exhibition explores the notion that an artist could use clothing and fashion as a strategy to create his distinctive professional profile of success and wealth. Just as artists’ studio-homes “were infused with their owners’ personal artistic sensibilities” to convey an image of their refinement, high culture, and good taste, their dress also served to attract clients.[2] The exhibition will examine then-current fashion trends among Victorian men, and their social and cultural implications during the latter part of the nineteenth-century, before turning to specific photogravures from Artists at Home, and analyzing the artists presented in these photographs, and their clothing, in the context of late Victorian fashion. Then, it will explore how these artists not only effectively redefined fashion in a way that eliminated any effeminate and dandyish associations related to excess clothing consumption and self-adornment, but rather recast fashion to reinforce their masculinity and gentlemanly qualities—all of which were crucial factors in creating a desirable public image to attract wealthy patrons, ensuring the artist’s worldly professional and social success.