GEORGE A. LAWSON
Biographical sketch of G. A. Lawson

Stephens begins with a brief sketch of Lawson’s early development, outlining his early life and education in Edinburgh, his travels in Italy, his subsequent move to Liverpool, and finally his introduction the London art scene in 1862, when his marble sculpture Jeannie Deans was displayed at the Royal Academy. Stephens then recaps the highlights of Lawson’s career, providing a list of works and where they were shown, as well as their contributions to Lawson’s style. He begins by discussing the sculptor’s poetic and narrative works and then briefly describes some of his public portrait commissions. Stephens then lists the sculptures on view in Lawson’s studio at the time of the Mayall photograph.

MR. GEORGE A. LAWSON was born in Edinburgh in 1832, and, after receiving a sound scholastic education there, followed a very early bent of his mind and feeling by becoming a pupil of Mr. Alexander Ritchie, a Scottish sculptor who had attained some reputation in that metropolis.  From the atelier of this artist my subject, being still but a lad, became a Student of the Royal Scottish Academy, and, a few years later, having passed through the curriculum of that institution, visited Rome while the intense classicism of Gibson’s ideal still ruled in the Eternal City.  Avoiding this scholastic influence, which had guided many promising men, Mr. Lawson examined the antique for himself, and resolved not to follow the academical leader, but to impart greater vitality to his designs than the canons of traditional art allowed, although, strangely enough, the learned overlooked the Elgin Marbles, which are at once the most animated and the noblest monuments of Greek art.

Returning from Italy, Mr. Lawson settled for a few years at Liverpool, and soon enlarged that reputation which certain vigorous designs of romantic and domestic figures and groups in terra-cotta, and some noteworthy portrait-busts, had won for their author in the North, at Edinburgh and elsewhere.  A series of dramatic and picturesque works increased this reputation of Mr. Lawson’s, which, however, did not reach London until 1862, when a statuette in marble, entitled “Jeannie Deans,” appeared at the Academy, and compelled some attention to its author.  A cast of this production is on our right among the figures shown in the view of the studio, which follows here.  Removing in the interval to London and a wider field, the artist allowed four years to elapse before, in 1866, he again contributed to the gallery in Trafalgar Square.  On this occasion two works were shown, being “A Group” and “Prayer, an ideal bust,” both of which examples proved that graver notions than before obtained force with him were active in the sculptor’s mind.  He sent “The War Song,” terra-cotta group, to the Dudley Gallery in the next year, it being the only plastic design in the room.  It was afterwards bought by the “Association for the promotion of Fine Arts,” and presented to the National Gallery of {24} Scotland.  To the Academy of this year he sent “Cupid’s Messenger,” a terra-cotta figure.

In 1868 we had “Diana Vernon,” a spirited statuette in bronze, and the humorous figure of “Dominie Sampson” standing as if just rising from his knees among the books which load the floor before his gaunt form, while he is in the act of exclaiming “Prodigious!”  With these works we remember a portrait-bust, and the graceful group called “The Maiden’s Secret,” a cast of which is still in the studio, see below.  “The Ancient Mariner” and “Tubal Cain” were at the Dudley Gallery in 1869.  The last-named year produced, at the Academy, “The Maiden’s Secret,” in marble, and “The Murmur of the Shell.”  “The Invocation” was at the Academy in 1870, in marble, and in terra-cotta at the “Dudley,” with “The Friar,” a small figure of much vivacity of design.

Succeeding years produced the following, among other, but less important pieces—“Psyche,” “Come unto these yellow Sands,” a group (1871), “The Minstrel,” “Girl and Tortoise,” “Hubert and Prince Arthur,” “Nymph at the Pool,” “The Ramblers.”  Of the motive of the last-named example there are two versions, each of which is a finely designed and composed and very graceful group of two girls.  The maidens are walking side by side, and their draperies and attitudes are charming.  One of the best of our sculptor’s works came forth in 1879, being the seated figure of the laurel-crowned boy, “Callicles” in the act of steadying the lyre in his lap while, with the often-tried magic of its strings, he essays to soothe the heart of his master Empedocles, Mr. Matthew Arnold’s moody poet, who is supposed to be contemplating death in the crater of Etna.  The pose and execution of the figure are alike beautiful, the sculptural style employed is pure and severe without hardness or crudity, the finish is fine, and the face, of a good Greek type, is full of a grave and tender sentiment. “In the Arena” (1878) is a large and extraordinarily energetic group of a man who, being condemned, bare-handed and unarmed, to fight a panther, has thrown the furious beast upon its back and stoops over it while grappling its body with his hands, as if about to tear it to pieces; his knee binds the creature to the earth.  The style of this group being instinct with something that is Etruscan in its force and austerity, is much more pronounced and emphatic than that of “Callicles,” which is altogether Greek.

With the lyre-player we had, in 1879, a terra-cotta bust called “A Corsair,” and two portraits.  1880 gave to the world an example of progress in a softer style than that of “Callicles,” being the life-sized naked figure of Daphnis of Mitylene, the graceful youth whom Chloe loved, half standing and half leaning against a tree, holding his pipe, and seeming to hesitate to play again.  It is an excellent piece of careful modelling.  It is needless to describe the large draped statue of Cleopatra, which was at the Academy in 1881; it appears in the view of the studio, and is in the act of leaning back in the chair while the asp’s poison works its will.  “Automate” was at Burlington House two years ago in the form of an heroic size, fully draped statue of the Danaid, who, having slain Busiris, her {25}  betrothed, was condemned to toil perpetually, filling a vase with water and emptying it.  With the heavy vessel at her hip and clutched between her clasped hands, the neglected drapery drooping from her shoulder, the woman drags her hopeless feet along and slowly swings herself in the weary path she has to tread for ever.  “The Girl and Tortoise” of 1883 is shown in the view of the studio.

Besides the above poetical examples, Mr. Lawson has executed several important public statues.  These include that of the Duke of Wellington, which surmounts the column at Liverpool; “Admiral Cochrane,” which is at Valparaiso; “John Wheelwright,” destined for the same city; “Pease,” for Darlington; “John Vaughan” (Bolckow, Vaughan, & Co.), to be unveiled at Middlesborough on Easter Monday next, and a statue of the late Mr. Moorhouse, for Auckland, New Zealand.  At present he is finishing for the Academy a nude figure of an antique Retiarius, or wielder of a net and trident in a Roman arena.

Turning to the portrait, the reader will, beginning on his left, recognize the sculptures in the following order:  1, a figure of Lord Beaconsfield, placed on a pedestal between two allegorical statues; 2, “The Girl with a Tortoise”; 3, “Cleopatra”; 4, a bust progressing in clay, being a portrait of the late Mr. Dorman; 5, “Come until these yellow Sands”; 6, “The Nymph at the Pool”’ 7, “Jeannie Deans”’ 8, a terra-cotta group of “Hubert and Arthur”; 9, “The Maiden’s Secret”; 10, on the ground, with one arm raised on high, is a small model for the Retiarius in the act of swinging his ponderous trident, while he cries “Ave Cæsar!” 11, likewise on the ground, represents a handsome, loose-jointed, lounging fellow, lazily looking about him.  It is the model of a statue to be. 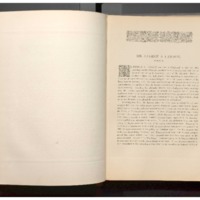