The text provides a brief overview of Alma-Tadema’s early years, artistic education, and career. It describes his early days as a pupil of several important masters who had influenced his art and his subsequent rise to eminence, first in his own country and then in England and France. The text makes note of his numerous awards and provides a list of his main works.

MEMBER OF THE INSTITUTE OF FRANCE, THE SOCIETY OF PAINTERS IN WATER COLOURS, AND OF THE ACADEMIES OF EDINBURGH, AMSTERDAM, MUNICH, BERLIN, STOCKHOLM, NAPLES, VIENNA, AND MADRID,

OFFICER OF THE LEGION OF HONOUR, AND OF THE ORDER OF THE LION

OF NASSAU; KNIGHT OF THE ORDERS OF LEOPOLD, THE DUTCH LION,

ST. MICHAEL OF BAVARIA, AND OF THE CROWN,

AND “POUR LE MÉRITE” OF PRUSSIA

THIS artist was born, says the best authority (himself), January 8th, 1836, at Dronriyp, near Leeuwarden, in Friesland, a province so long allied to Holland that the outer world takes, although erroneously, its natives to be Dutchmen.  His patronymic is a very ancient one, and associated with a part of the history of the Zuider Zee, according to which a Tadema held lands in that now submerged district.  After the catastrophe the family found a refuge in Ameland.  At the Reformation they were settled in Friesland, and their head was Pastor of the Mennoniet Sect:  to him our painter’s pedigree can be traced.  In English the name means Adamson, the prefix “t” being equivalent to the English suffix “son.”  Alma is a cognomen and independent of the bearer’s surname.  The painter’s father, a notary by profession, was officially Notary of Leeuwarden.  He had considerable skill and some reputation in music.  He died in 1840.

The young Lawrence began to practice drawing when he was little more than four years old, and his vocation was found when a friend gave him a box of water-colours.  Educated at the Lycée of Leeuwarden, he, instead of devoting himself mechanically, and almost exclusively, to the dead languages, cultivated that knowledge of antique life and men which now distinguishes his art.  His mother intended he should be educated at an university, and practice one of the learned professions.  They therefore opposed the boy’s artistic proclivities.  The reports of a local doctor that he was not robust enough to bear severe studies obtained for my subject leave to follow that art of painting which was supposed to be easy, if not lucrative or very honourable.  His first models were family portraits of a {30} jejune kind; his first teacher was a village drawing-master; Da Vinci’s treatise on painting, and the “Jesuit’s Perspective” were his first guides, and with characteristic energy he exhausted the latter.  Thus it became impossible for the student, whether by means of colour, light, shadow, or outlines, to be satisfied with less than perfect representation of form in the solid.  In the verisimilitude and logical technique of the master we see fruits of this training.  His first complete painting in oil was (1849) a portrait of his sister.  A nearly life-size portrait of himself, painted in 1851, which we saw at the Grosvenor Gallery in 1882, was Tadema’s most noteworthy production ere he obtained leave to devote himself to art; its sterling qualities attested the tenacity and astonishing diligence of the youth who was then, in every sense, busily making himself.  It shows with intense energy a boy with thin set lips, seated at an easel, and with eager eyes already searching nature.  Hard, sharply defined, crude, and dark in its brown shadows, and pallid in its flesh, there is much in this remarkable exercise which predicates the solidity, searching modeling, and true drawing of many another picture in the following list.  Mr. Gosse’s memoir, to which I am indebted for some details in addition to those furnished by our common friend, the artist, states that when it was determined to obtain better instruction for the latter than Leeuwarden afforded, a painter of Amsterdam was requested to become his master; but, “as no one coveted a Frisian pupil,” the boy was in 1852 sent to the Royal Academy at Antwerp, which is the lineal descendant of the Guild of St. Luke founded in the fifteenth century by the Duke of Burgundy.

The ruling master at Antwerp was M. Wappers; from him Tadema’s first art-teaching was obtained.  In a year Wappers gave place to Professor Dyckmanns, whose smooth, academical, but intensely popular “Blind Beggar” is in our National Gallery.  Given his own resolute and energetic genius, Tadema could not have found a better teacher than the laborious professor under whom he continued to study technical art until he was twenty years of age.  The learned antiquary, M. De Taye, Professor of Archæology at Antwerp, assisted the youth in those studies of antiquity which from childhood he had never ceased to affect.  It was not, however, as a painter of antiquity Tadema made his débût.  His first finished picture (1856) must have been in the Dyckmanns manner; thus he produced “A Poacher returning Home.”  Dutch history supplied the subject of the next year’s work, which represented “The Inundation of the Biesborch in 1421.”  “The unfavourable Oracle,” which followed, has been damaged, but retains interest as the first of Tadema’s series of Egyptian subjects.  It represents the envoys of the Kind of Egypt imparting an unfavourable answer to him after they had consulted an oracle with regard to the life or death of his sick heir.  “The Destruction of the Abbey of Ter Doest,” embodying a highly energetic and dramatic design, was received with a little applause in the Brussels Exhibition of 1856, and marked the first success of the painter.  In 1859 praise attended “Clotilda weeping over the Tomb of her Grandchildren.”  This picture was at the Grosvenor Exhibition, 1882. {31}

It was evident, however, that the artist had yet to educate his public, or to teach himself that large canvases were not in demand.  Some of the works produced before 1861 were, on being returned unsold to him from the exhibitions, more or less effectually destroyed by their author, who was, in fact, disappointed by the result of his previous studies, and perhaps a little at issue with himself.  We except from this record of destruction “A Bargain,” which, being dated 1860, was probably finished immediately after Tadema’s next departure was made; it bears distinct evidence of the influence of Van Eyck, the model of our artist’s next, and most effectual master, to whom we now come.  In 1860, being then in his twenty-fifth year, he found the right path on becoming an assistant of Baron H. Leys, who, while painting on a large scale at Antwerp, required help from a master of architectural perspective.  Becoming Leys’s pupil, my subject soon produced “The Education of the Grandchildren of Clovis,” which is now in the Palais du Roi at Brussels (this picture fell as a prize to the King of the Belgians, who had subscribed to the Art-Union Society of Antwerp).  When exhibited no one would buy it.  The King’s entire subscription was 10,000 francs.  This work was at the Grosvenor Exhibition, 1882, and it marked a prodigious advance in power and skill.  This noble drama has been engraved, and well deserves that honour.  A visit to Cologne, during which he was much impressed by the old German pictures gathered there, occupied part of the year 1861.  In the next year the already distinguished artist painted “Venantius Fortunatus and Radagonda” (this is the only Tadema now in Holland), and “Gonthran Bose,” which was sold for £100.  The latter concluded the first stage of his art, which, although far below it, was not unlike that level where the complete master stands.

In 1862 Tadema made his first visit to London, and obtained ample welcome.  In 1865 he painted “How the Egyptians amused themselves 3,000 Years Ago,” which, with two other works of his, was exhibited in the French Gallery, Pall Mall, in 1865, and thus made him known in England.  It had appeared with great éclat in Paris in 1864, and won the admiration of all the great French artists.  Several other works of his have been shown in Pall Mall since 1865, including “Tibullus’s Visit to Delia,” “The Honeymoon,” “Going to Mass,” “A Roman Dance,” “A Roman Poet,” “Ancient Roman Wine Merchants,” “In the Temple,” and “An Improvisatore.”  In 1863 Tadema married a French lady and visited Italy, where he was profoundly impressed by the remains of Roman art and life, and thenceforward was induced to devote his genius and rapidly developing powers chiefly to subjects of antiquity.  In 1864 he illustrated the Merovingian history by means of “Fredegonda and Prætextatus,” a noble dramatic piece.

Tadema’s fortune did not grow so rapidly as his reputation.  Therefore, in 1864, while in Paris for the first time, he, stipulating that at least half the number should represent {32} antique subjects, was glad to accept a commission from Mr. Gambart to paint, “at low but ascending prices,” not fewer than twenty-four pictures.  In 1865 our artist settled in Brussels and began the series of Roman subjects in which we mostly know his genius, learning, skill, and industry.  As a painter of all sorts of effects of light he, by this series, secured honour.  This is apart from the marvelous felicity of his technique, the subtlety of his character-rendering, a sub-vein of humour which he possesses, his inexhaustible archæology and indomitable energy.  In 1865 he produced that brilliant new reading of antiquity and intense love-poem in painting, “Catullus at Lesbia’s,” where fresh fire was breathed into those cold ideals of “classicality,” the bequests of David to art.  Much had yet to be achieved by the painter, but his way was now clear.  For the first time classical genre subjects were represented with verisimilitude, learning, and technical mastery; the graces of the antique overcame the heaviness of the Belgian Leys, while the deep tones and splendid coloration of Venetian and early Low Country painting were united in the exposition of designs of the most dramatic movement.

The distinctions and honours which have illustrated the labours thus concisely described are far too numerous for exhaustive mention here.  Suffice it that among other professional honours not named above, Mr. Alma Tadema received a French Medal in 1864; another, of the Second Class, at the Exposition Universelle, Paris, 1867; and a third, of the First Class, at the Exposition Universelle, Paris, 1878.  His first wife died in 1869.  He settled in London in 1870; married Miss Laura Epps, herself now an artist of position, in 1871; was elected an Associate of the Society of Painters in Water Colours, his first English honour, in 1873, and a member of the same body in 1875.  He was elected an A.R.A. in January, 1876, and an R.A. in June, 1879.  He received letters of Denization from the Queen in 1873.  All London sympathized with him when, October 2nd, 1874, his house, a very treasury of art, was shattered by the explosion of a barge’s cargo of gunpowder and benzoline.  That now reinstated house would require a volume for its illustration.  The view before us gives part of the painter’s studio, with a bronze bust of Mrs. Alma Tadema standing over the fireplace and backed by a curtain of cloth of gold. 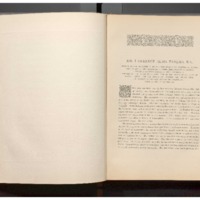