Born in Slateford, near Edinburgh, MacWhirter studied in Scotland under R. Scott Lander and John Ballantyne. In his youth he traveled widely in search of subjects for landscape paintings, and he made such rapid progress in his art that by 1864 he had been elected an Associate of the Royal Scottish Academy. Since 1865, he has exhibited oil paintings and drawings at the Royal Academy and the Dudley Gallery in London, primarily landscapes, often with poetic themes.

MR. MACWHIRTER, the son of a paper manufacturer seated at Colinton, near Edinburgh, was born at Slateford in the same district, on the 27th of March, 1837, and educated at Peebles.  The late Mr. Dafforne, of “The Art-Journal,” in a biographical notice of this highly popular A.R.A., told us that the elder MacWhirter was a “botanist, geologist, and enthusiastic lover of nature.”  This parent died when his son was twelve years of age, before he left school, and intended the boy should become a painter or engraver; nevertheless, the guardian of the latter caused him to be articled for five years to a publisher of Edinburgh.  This engagement proving distasteful to the person chiefly concerned, was soon brought to an end, and the youth was entered as a student in that renowned Trustees’ Academy which has produced a host of well-known artists, among whom, as we have already stated in the memoir of that gentleman, was Mr. Pettie.  The school was at the time, so far as our painter was concerned, under the direction of Messrs. R. Scott Lander and John Ballantyne, who instructed their pupils to work in that manner which is copiously illustrated on the walls of the Royal Academy, and, however various its applications may be, possesses what is almost unique in this island, the very distinct character of a School in the artistic sense of that term.

With, it is said, unusual diligence, Mr. MacWhirter applied the instructions of his masters to his favourite landscapes, and when little more than a boy, travelled in several parts of Scotland, especially in the Isle of Skye.  Some time after this, the student visited Italy, and found materials which have been made use of in London as well as in Edinburgh.  Later, he went to Norway, Belgium, and Tyrol, and, later still, he was in the Salt Lake City, California, the Yosemite Valley, and other parts of the United States.

Meanwhile, he made such rapid progress, and commanded so much attention in the Scottish metropolis, that, in 1864, having been fully represented in the gallery of that society, he was elected an Associate of the Royal Scottish Academy.  At a more recent date, being disqualified for the Academicianship proper by non-residence in the land of his {58} birth, Mr. MacWhirter was elected to that higher honorary grade he now occupies.  In 1865, he made a double appearance in London by sending, (1), to Trafalgar Square, a small picture, which was hung in the South Room and attracted no great attention; it was called “Temple of Vesta, Rome;” and (2), to the Dudley Gallery, two drawings, each of which was called “Wild Flowers, Norway.”  These works were followed in the latter exhibition, and with some exceptions, from year to year, by “Highland Cornfield,” “Shells,” “Norwegian Wild Flowers,” “Glenfinlas,” and “Ellen’s Isle, Loch Katrine.”  The Winter Exhibition of Cabinet Pictures in Oil in the same gallery contained, in 1871, “Moorland Road, Sunset,” and, in later years, “The Golden Gate—Entrance to San Francisco Bay,” “Old Rome,” “Thunder Storm on the Grand Prairie,” and “A Summer Storm, Venice.”  The artist, who has practised drawing in that material with peculiar success, contributed a study in charcoal to the Exhibition of Black and White.

Returning to an enumeration of pictures at the Academy since 1866, we find nothing by Mr. MacWhirter in the gathering of 1867, but in 1868, having in the interval quitted Edinburgh for London, he sent to Trafalgar Square “Old Edinburgh—Night,” an effective illustration of picturesque buildings and their gigantic shadows, which commended itself to many observers, and was succeeded in the next year by “Loch Coriusk, Skye,” a telling picture of that place of dreary grandeur, and stony wilderness.  It was much noticed at the time for the impressiveness of the gloomy tarn, relieved, or made more ghastly, by a band of pale light on the sky-line.  “Daybreak” was the picture of 1870; it aimed to illustrate verses beginning:--

“A wind came up out of the sea,

It hailed the ships and cried ‘Sail on,

Sail on, ye Mariners, the night is gone,’

And hurried landward, far away,

It crossed the graveyard with a sigh,

“Into the Depths of the Forest,” and a pathetic landscape representing the motive of the lines,

“A great while ago the world began

“Night, most glorious night, thou were not made for slumber.”

“Land of the mountain and the flood,”

{59} (1875); “Spindrift,” “The Lady of the Woods,” a birch tree standing alone near the foreground of a hillside, a picture which charmed many visitors to the Academy, and has been engraved in line by Mr. Sadler (1876); “Over the Border,” a view of a wild heath, with a pool in the front, at one side of which a rough road ran, while, on the road, a horseman was urging his steed to a furious gallop.  He is flying from pursuit, from one country to another.  With this telling piece of dramatic landscape we had, “The Source of a River.”  No works were shown in 1877.  Those of 1878 were “The Vanguard,” and “The Three Graces,” i.e., three birch trees, a companion painting to “The Lady of the Woods.”  In 1879, Mr. MacWhirter made his appearance as an A.R.A., with “The Last Days of Autumn,” “A Valley by the Sea,” “A Highland Solitude, Glencoe,” and “A Highland Pastoral.”  “June,” “The Lord of the Glen,” a gigantic pine (engraved as a companion to “The Lady of the Woods”), and “May,” were at Burlington House in 1880.  “Roses and Rabbits,” “Mountain Tops,” “Sunday in the Highlands,” and “Summer Evening, Venice,” illustrated in 1881 the varied tastes of the painter.  The works of 1882 were “Ossian’s Grave,” “A Highland Auction,” “A Rainy Day, Venice,” and “Il Penseroso;” those of 1883 were “Corrie, Isle of Arran,” “Sunset Fires,” “Nature’s Mirror,” and “A Highland Harvest.”  This year, 1884, we recognize the “Roman hand” of the artist in “A Sermon by the Sea,” “The Windings of the Forth,” “The Home of the Grizzly Bear,” and “A Forest Solitude.” 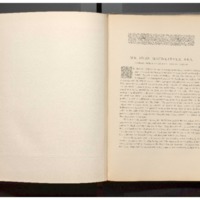