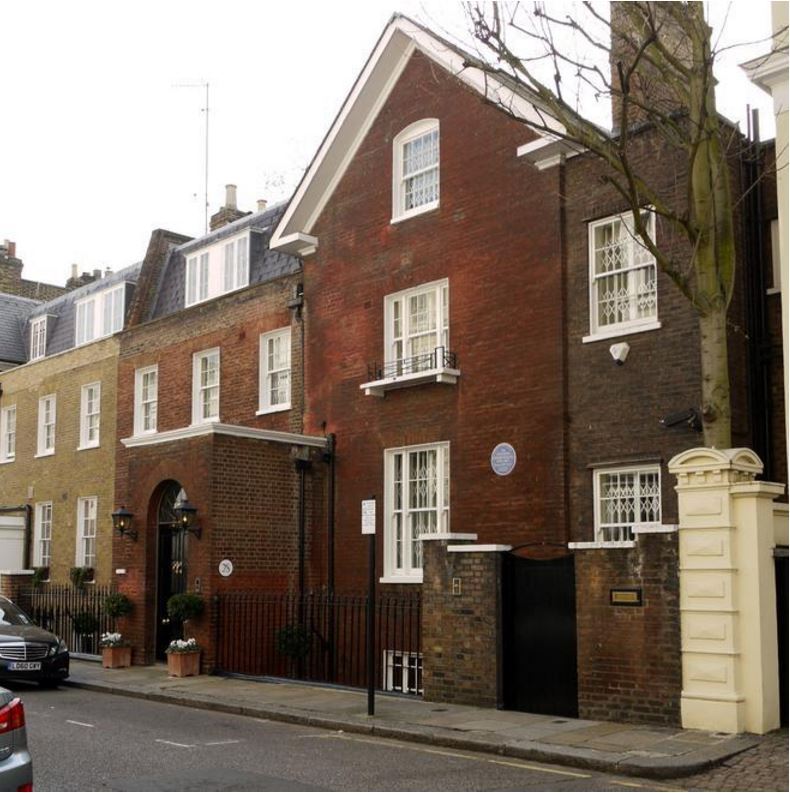 In 1841, Richard Redgrave and his friend the artist Charles West Cope (1811–1890) bought ninety-nine year leases on two neighboring plots of land in Hyde Park Gate, Kensington, for a ground rent of £14 a year. Here, they built a pair of semi-detached houses with built-in studios. Cope had been one of Redgrave’s first friends in the Royal Academy; they had met when Redgrave had just begun taking classes there in 1826. In 1842, Richard Redgrave’s older brother Samuel built a house on a small plot of land just to the south; he had another, smaller house built on the same plot in 1847 and moved there himself in the 1850s. Two of Richard Redgrave’s sisters, Margaret and Elizabeth, lived in this house with Samuel.[1]

At the time, the land seemed so unpromising that Cope described it as “the haunt of one or two donkeys which fed on the thin grass and thistles.” Redgrave’s daughter, Francis Margaret Redgrave, provided a more romantic image: “Kensington was, in those days, picturesque indeed, and the High Street did not aim at being a small Regent Street. The ugly old church, the irregular line of shops, and the red brick gateway leading to William III's palace, made it resemble an old Dutch town.”[2]

Richard Redgrave and Charles Cope built numbers 18 and 19 respectively (changed in 1891 to 27 and 28) Hyde Park Gate South.[3] Richard Redgrave provided the designs for both houses, which were conservatively styled in the Georgian tradition. The houses were an understated pair of orange, brick-fronted villas, with few decorative features save for the gables and overhanging eaves, which “provided a touch of rusticity to match their surroundings at the time of building.” The studios, located at the back of the houses and entered through a gallery, were double-height rooms that projected out into the garden.[4] This location allowed the two men access to the north light as they worked. Redgrave and Cope were among the first artists to move to the suburbs and build custom studio homes there, making them pioneers in South Kensington. Within thirty years of their purchase, Kensington had become a vibrant and well-populated artists’ community.[5]

While Cope retired to the country later in his life, both Samuel and Richard Redgrave lived in Hyde Park Gate for the remainder of their lives. At the time these houses were built, Richard Redgrave had just married Rose Margaret Bacon, and the couple raised their three children there. Their daughters, Francis and Evelyn, lived at number 27 until their deaths in 1932.[6]

In 1945, Winston Churchill acquired number 28 and later bought number 27 to use as office space. He made several significant adjustments to the property, including joining the houses into one, and apart from his second term as prime minister between 1951 and 1955, Churchill lived at 28 Hyde Park Gate until his death in 1965.[7] In July 1965 the house went up for auction and was expected to fetch $750,000. Hyde Park Gate was described at the time as a two-hundred-yard-long, dead-end street with twenty, mostly unimportant or ugly, houses.[8]

[4] Bonython. “Richard and Samuel Redgrave,” 6; and “Hyde Park Gate and Kensington Gate," in Survey of London.

[7] "Hyde Park Gate and Kensington Gate," in Survey of London,