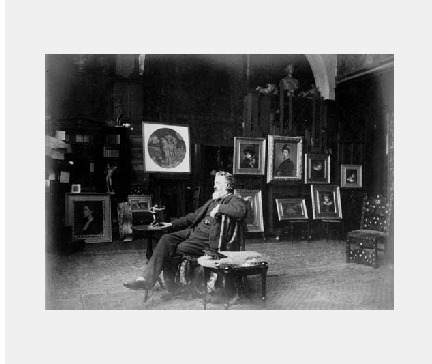 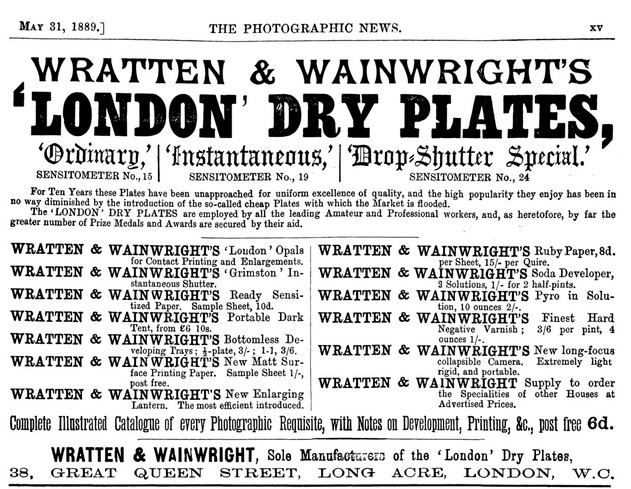 J. P. Mayall produced the series Artists at Home at the perfect moment in the history of photography. As a medium, photography did not truly exist until the nineteenth century, although the camera obscura—a contraption consisting of two boxes and a lens that created a transparent image—had been in use since at least 1515, when Leonardo da Vinci described it. The first daguerreotype, a photograph produced by exposing a silver-coated copper plate to iodine vapor, was made in 1835. Next came the calotype in 1841, which, unlike the daguerreotype, was capable of replication. In 1851, a new, more useful kind of photography came into existence—the wet collodion, or “wet plate,” process. This allowed multiple copies of a photograph to be made from a single negative and produced sharper, clearer pictures; it was also cheaper and faster than earlier methods. However, wet collodion plates needed to be prepared and developed in a darkroom, as they were highly sensitive to light.[1]

These developments in photography bring us to 1883 and the photographs taken for Artists at Home. As the publishers acknowledged in a preliminary note, Mayall’s task had not been easy, and “the recent improvement in photography by the introduction of the Rapid Dry Plate has alone rendered the thing possible.”[2] Indeed, the so-called dry plate, invented in 1871, had revolutionized the medium. Unlike wet plates, dry plates required no preparation in the darkroom, and because they were produced and prepackaged in a factory, they were cheap, easy to find, and easy to use.[3] Even more important for Mayall’s purposes, dry plates were more sensitive to light, which shortened the exposure time, making it possible to photograph interiors. “In Mr. Mayall’s hands,” the publishers noted, “the photographs may fairly lay claim to a success beyond the average, more especially when the difficult task of photographing interiors is taken into account.” [4]

Mayall particularly preferred the Wratten brand, made by Wratten & Wainwright of London beginning in 1877. These gelatin-based collodion dry plates reduced the challenges of indoor photography.[5] “I have hardly seen a room which does not admit of being photographed with Wratten’s dry plates,” Mayall declared in 1888.[6] The photographs themselves—the originals from which the photogravures were made—were albumen prints, approximately 6½ x 8½ inches (or the reverse, depending on their orientation). More than forty of these “Portraits of Members of the Royal Academy, circa 1870s [sic],” all contained in a red cloth box, turned up at Christie’s London in October 2000 and brought a price of £999.[7]

Mayall’s published account of photographing W. E. Gladstone for Artists at Home outlines his photographic process. First, he set the scene, rearranging objects in the room, posing the prime minister with a headrest (a small gadget used to stabilize the sitter’s head, which Mayall always used), and setting up the camera. He customarily used double slides, which he had to wait to charge, but because of the dry plate technology he was spared the lengthy process of chemically treating the plate. The photograph itself was exposed for exactly 120 seconds. “Mrs. Gladstone and her son, who were in the library at the time, thought that I had exposed the plate five minutes, the time seemed so long,” Mayall recalled. “I said no, I had counted 120 long seconds, so Mr. Gladstone very good naturedly said, ‘Photographic seconds,’ which I explained must be lengthened out if possible, as every photographer dreads under exposure.“[8]

Like most professional photographers, Mayall usually worked with an assistant: for Artists at Home, this was a younger photographer from Brighton, Frank Dudman. In many instances, as copyright records reveal, Dudman himself was the actual photographer of the artist at home, presumably working under Mayall’s precise instructions. Mayall was, for example, particular about lighting. “I make this observation in general as regards photographic portraiture,” he wrote, “that the normal expression of the face can only be obtained in a subdued light—photographic studios have generally too much glare. This I consider a fatal objection to the use of electric light, which is very apt to call up a painful, forced expression seen at no other time.” But had admitted that there was another crucial element necessary for a successful portrait—the photographer himself: “A good photographer requires to be a fair chemist, a man of good taste and agreeable manners, and very much indeed of an artist.”[9]