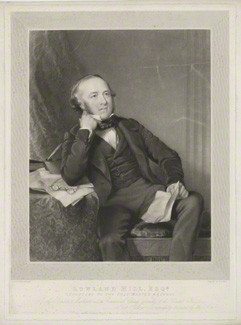 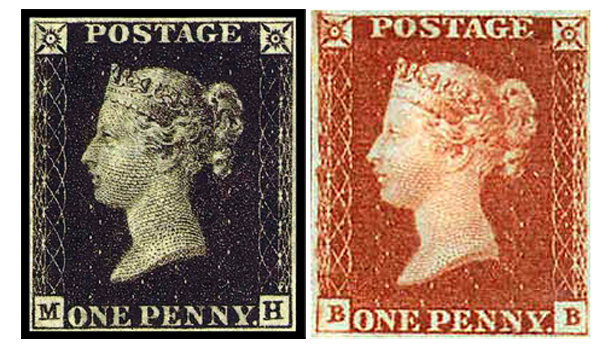 The Penny Black and Penny Red postal stamps, used for correspondence from 1840 until 1879.

“By the supply of a cheap, rapid, and trustworthy means of communication not only have our people, high and low, enjoyed continuous intercourse and fellowship with absent friends, not only have works of charity been facilitated, sympathies enlarged, and unity of national feeling promoted, but, in addition, an incalculable stimulus has been given to trade and industry” (The Fortnightly Review, 1886).[1]

The reformed penny-postage system, or penny post, introduced by Rowland Hill in 1840, influenced almost all sectors of Victorian life. Prior to 1840, correspondence could cost as much as a day’s wages for the working classes, and those receiving a letter had to pay for its delivery (prepayment was viewed as social slur on the recipient).[2] The penny post introduced four reforms to the postal system, in addition to establishing a one-penny fee for sending letters: (1) prepayment of postage, (2) payment by weight instead of the number of sheets, (3) the use of the envelope, and (4) the use of adhesive stamps on letters.[3] As expected, lower costs and increased convenience led to rapid expansion of the service: in 1839 about 76 millions letters were sent, a number that more than doubled, to 169 million, in 1840.[4]  The penny post allowed Victorians to move across geographic boundaries while remaining in contact with family and friends. More importantly, Victorians could communicate and conduct business without needing to travel, a convenience that was particularly prized by artists.

During this period, the quality of a letter was a marker of character and determinant of social status, as becomes apparent in such widely circulated letter-writing manuals as The Universal Letter Writer and The Wide World Letter Writer.[5] A Victorian letter, therefore, may suggest the identity, insecurities, and aspirations of its author. Even in the twentieth century, the form of a letter can be taken as a token of the writer’s personality, as Emily Post remarks,

The letter you write, whether you realize it or not, is always a mirror which reflects your appearance, taste and character. A “sloppy” letter with the writing all pouring into one corner of the page, badly worded, badly spelled, and with unmatched paper and envelope—even possibly a blot—proclaims the sort of person who would have unkempt hair, unclean linen and broken shoe laces; just as a neat, precise, evenly written note portrays a person of like characteristics.[6]

Correspondence, although personal, also serves a communal role, occupying a liminal space between public and private, much like the studio houses of Victorian artists. Indeed, suggestions for letter-writing appear strikingly similar to expectations for studio houses: “Its [a good letter’s] chief aim should be to depict the writer’s real self with such fidelity that the reader may feel every word to be part of a conversation on paper. For this purpose not a single letter should be stilted or unnatural.”[7] Joseph Parkin Mayall’s 1884 publication Artists at Home, a series of photogravures of artists in their studios, faced criticism on this same premise; an 1884 review in The Art Journal wrote, “But these plates do not show us the artists really at home; or, at least, they show them only as they are at home to the photographer. All the handsome furniture has been piled into that part of the room which is represented in the plate, while the owner of the studio has posed himself gracefully at the right point.”[8] This exhibition compares the construction of the artist’s public persona through their letters and their custom-built studio houses by analyzing the letters of Frederic Leighton and John Everett Millais and their studios, as represented by Mayall in Artists at Home.