This text presents biographical data on Thomas Webster's life, highlighting his many accomplishments. He is the oldest of the Artists at Home group and the "doyen" of several artistic practices. Webster spent the latter half of his life in Cranbrook, painting homely images of rural life and leading a group of peers referred to as the Cranbrook Colony.

MR. THOMAS WEBSTER is not only the Doyen of the painters in the Royal Academy, but, having been admitted a Student so long ago as 1821, the oldest artist associated with the body in that degree.  Born March 20th, 1800, he is, I believe, the Doyen of the three artistic professions at large in England.  In these respects the venerable painter is, apart from other claims, entitled to a high place in this roll of men of note.  He was born in Ranelagh Street, Pimlico; his father being a member of the Royal Household, was removed to Windsor with his family in 1801, where his son remained, and became a chorister in the Chapel Royal, St. James’s.  He continued about the Court till the king’s death in 1820.  Like most artists whose powers are innate, my subject even when a boy preferred painting to psalmody, and when this inclination became distinct and his abilities were developing, they were wisely yielded to, and the preliminary studies being achieved, the aspirant entered the Academy schools in his twenty-first year.  Until then he can scarcely be said to have had regular instruction in art.  It is therefore the more to his honour that, in 1823, the young painter exhibited at the Academy “Portraits of Mr. Robinson and Family.”  In 1824, and at the British Institution, Mr. Webster’s first genre subject appeared with the appropriate title of “The Truant Boys;” this was a picture of 2 feet by 3 feet.  In 1825 he obtained a medal for a copy of a picture, made in the School of Painting of the Royal Academy.

The following list of pictures exhibited in London from 1824 till 1830 will, better than any other record, signalize the energy of the artist, and indicate the direction of his taste and practice.  At the Royal Academy in 1827 appeared “The Children of T. Drane, Esq.,” and, in 1829, “Gunpowder Plot.”  At the British Institution Mr. Webster’s works of this interval were, in 1826, “Malvolio, Olivia, and Maria;” in 1828 “The Soldier’s Return,” “A Committee of Taste,” and “The Cottage Diorama;” in 1829, “The Prisoner,” “A Foraging Party Routed,” “The Favorite,” “The Modern Diogenes,” “The Disputed Title,” and “A Society of Antiquaries,” and, in 1830, “The Sick Child.”  To the Society of British Artists’ Gallery, 1825, he contributed “Lavinia and Her Mother;” 1826, “The Fortune Teller;” 1827, “Young Rebels shooting a Prisoner;” {10} 1828, “Rebels defeated,” and, in 1830, “The Dog in the Manger.”  It will be observed that nearly all these subjects comprise children, and that the choice of such themes has been maintained by the artist till recent times.

A complete list of Mr. Webster’s pictures which have been shown to the world would add little of value to the above.  The following examples were, however, noteworthy in their various ways.  At Suffolk Street was, in 1831, “Il Penseroso,” the last of the painter’s works in that place.  At the Academy the under-mentioned pieces secured popular attention.  1832, “Smugglers;” 1833, “The Lantern,” and “A Village School;” 1835, “Bird Catchers,” and “The Intercepted Letter;” 1836, “Going to School,” which is now in the National Gallery, and “Coming out of School;” 1838, “Breakfast;” 1839, “Foot-ball;” and 1840, “Punch.”  The above-named and other pictures secured the painter’s election as an A.R.A., which occurred in 1841, when “The Boy and many Friends,” “The Smile,” and its companion, “The Frown,” appeared, and have wide-world recognition by means of the engravings made from them for the Art Union of London.  These works were succeeded by a group of portraits of the artist’s father and mother, painted in 1843, to commemorate their golden wedding, “The Dame’s School,” which is in the National Gallery, and has been engraved by Mr. Lumb Stocks, “Good Night!” “A Village Choir,” now at South Kensington, “The Internal Economy of Dotheboys Hall,” “A Rubber,” “A See-Saw,” “A Slide,” “A Cherry Seller,” “A Farm-house Kitchen,” “A Chimney Corner,” “A School Play-ground,” “A Letter form the Colonies,” “Village Gossips,” “The Grandmother,” “The Impenitent,” “Sunday Evening” and “Grace,” “Going to the Fair,” and “Returning from the Fair,” are at South Kensington, with “Sickness and Health,” and “Contrary Winds.”  Besides these we have had “The Battle of Waterloo,” “Politicians,” “Odd and Even,” “An Interested Adviser,” “The Race,” “A Tea Party,” “Wreck Ashore,” “Waiting for the Bone,” “The Letter,” and a portrait of the painter in his donkey-chair, with the quotation: --

“As the soft after-glow lights up the western skies,

So is my evening bright with fond memories.”

A very considerable proportion of the above and several other of Mr. Webster’s works have been engraved by various hands.  The artist was elected a Royal Academician in 1846.  His latest exhibited picture was at the Academy in 1879, and entitled “Released from School.”  He became an Honorary Retired Academician in 1877.  Since 1856 he has resided at Cranbrook in Kent, where, seated in his own garden, he is represented by the photograph. 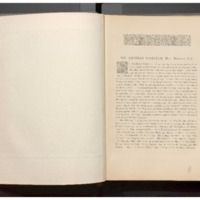