Publisher's advertisement for the forthcoming publication, including publication details and a list of the artists whose portrait photographs are to be included.

Dedicated by special permission to Sir FREDERICK LEIGHTON, President of the Royal Academy.
___

Have much pleasure in announcing that they have made arrangements with Mr. J. P. MAYALL, Photographer, Park-lane Studio, to produce a Monthly Series of absolutely permanent PHOTO-ENGRAVINGS, entitled

Mr. J. P. MAYALL has been honoured with permission to photograph a number of the leading Painters, Sculptors, Architects, and Engravers of the day in their studios, or in their homes, while surrounded by their pictures, sculptures, and other objects of art which characterise those places.  In this undertaking he has already been successful in obtaining most satisfactory Photographs of the following artists (a list to which other names will be added in due course):-

**It may be stated that the Right Hon. W.E. GLADSTONE, M.P., as “Professor of Ancient History” to the Royal Academy, has sat for a photograph in his library at Hawarden Castle. Other lay members of the Academy will be added to the series.

These likenesses have that interest which attaches to the most exact and characteristic representations of eminent men, each in the habit of his life, and in every sense at home. The portraits will be reproduced by an entirely new and unquestionably permanent process of PHOTO-ENGRAVING, and issued in Monthly Parts at FIVE SHILLINGS each part.

Every part will contain Four Engravings from the Photographs, all Facsimiles of the originals, and include a short Biography of each artist, with a description of his studio. The Biographies will be written by, and the literary portion of the work generally will be under the editorship of, Mr. F. G. STEPHENS.

The size of the work will be imperial quarto. The text and plates will be printed on the finest paper. Each part will appear in an appropriate wrapper.

It is further intended to print a Superior Edition on india paper, mounted on papier de Hollande, and of royal folio size, which will be limited to One Hundred Impressions taken from each plate before the lettering is engraved upon it; Fifty of which will be reserved for American subscribers. This edition will be published at Ten Shillings and Sixpence each Part, and supplied only to subscribers for not fewer than TWELVE MONTHLY PARTS, beginning with a volume.

It is intended to commence the publication in March, 1884, and to continue it monthly.

The FIRST PART will contain:--

Orders may be given to any Bookseller in Town or Country. 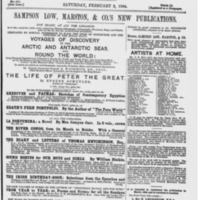 This item has no relations.