In this spacious sitting room, Samuel Cousins occupies a central position. Seated in a comfortable armchair, the engraver looks past the viewer. His legs crossed, his hands joined together in front of him, his pose is stable if slightly stiff. Above him hang four examples of his work and next to him is an engraving. Behind him we can see a shelf with books, further to his right is a mantelpiece overhung by a mirror. On the mantelpiece stand Asian vases and a small statuette, to its left hangs a fan. The old fashioned wallpaper and large Persian rug complete this image of a well-appointed Victorian sitting room.

Samuel Cousins, print after James Sant, Speak Lord For Thy Servant Hears also known as The Calling of Samuel (1854)

The online edition of this work in the public domain, i.e., not protected by copyright, has been produced by the Emory University Digital Library Program. 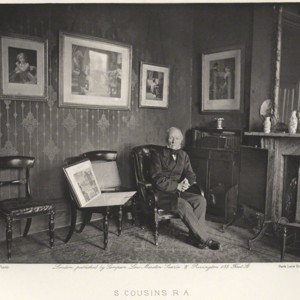