Highlights of Marcus Stone's career until 1884, beginning with a description of the artist's precociousness. Charles Dickens was a close friend of his father, genre painter Frank Stone, and an early admirer of Marcus's drawings. Stone received training from his father, whose death in 1859 pushed the young artist to produce many "more ambitious" works in the following years to support himself and his family. The artist became an Associate of the Royal Academy in 1877, and in 1882 the Academy purchased his painting A Prior Attachment (Il y en a toujours un Autre) with the Chantrey Fund.

THIS gentleman is the son and pupil of the late well known genre painter, Mr. Frank Stone, A.R.A., from whom, as he died when my present subject was but nineteen years of age, the latter had but brief time for learning the art they both practiced with éclat.  It is said that Frank Stone himself never had a lesson in drawing, and it is certain that, although previously distinguished in water-colour art, and an associate of the “Old Society,” he was not less than thirty-seven years of age before he exhibited a picture at the Academy.  It is remarkable that the son has inherited a considerable portion of his father’s mantle, and, without the least plagiary, obtained reputation by means of pictures like those among which he spent the first years of his life.  Artistic sons generally depart from the predilections of their fathers, and usually avoid the examples of their early days.

Mr. Marcus Stone, who was born July 4, 1840, was, according to the ordinary authorities, a draughtsman before he was four years old, and received Dickens’s praise for a design in 1853.  Not being a Student of the Royal Academy, the painter obtained none of the distinctions of that body, such as medals or the Travelling Studentship, until January 24, 1877, when he was elected one of its Associates, having, however, at that time, already contributed to its exhibitions since 1858, when his first essay before the world was named “Rest,” and illustrated the verses:--

“In all my wand’rings round the world of care,

In all my griefs—and God has given my share,--

I still had hopes, my long vexations past,

Here to return—and die at home at last.”

“Silent Pleading,” which represented a tramp sleeping in a shed, holding a child in his cloak, and visited by policemen, who hesitate to arrest him, appeared at the Academy in 1859, and was followed in 1860 by “The Sword of the Lord and of Gideon,” the picture of a Puritan hero, which attracted the admiration of many visitors to the exhibition, and deserved to be praised as the work of a young painter who, by its means, won his spurs. {28} Mr. Marcus Stone was, we understand, one of the most precocious artists of his time, and it has been said of him that he began to practice art before he could remember.  Extraordinary facility, and what may be called the clearest reading of his subjects, attended this long-sustained practice, and stood him in good stead when, in 1859, the sudden death of his father left him dependent on his own efforts for guidance.  The picture of 1864 showed how much progress the painter had made under those conditions.  It was entitled “Claudio, deceived by Don John, accuses Hero,” and owed its subject to “Much Ado about Nothing,” Act vi, 1.  “A Painter’s first Work” came forth in 1862, and the more important “On the Road from Waterloo to Paris” followed it in 1863.  The latter was more ambitious than most of Mr. Stone’s paintings.  Its subject was borrowed, as the catalogue of the exhibition tells us, from Béranger.  “Working and Shirking” (1864) and “Old Letters” (1865), were succeeded by “Stealing the Keys,” a daughter taking possession of the keys of her father’s prison-chamber, which was shown in 1866.  Next in their order severally came, “Nell Gwynne begging aid for the Old Soldiers” (1867), “An Interrupted Duel” (1868), “The Princess (afterwards Queen) Elizabeth obliged to attend Mass by her sister Mary” (1869), “Henry VIII. and Anne Boleyn observed by Queen Katherine” (1870), “The Royal Nursery, 1538” (1871), “Edward II. and his favourite, Piers Gaveston,” a telling episode in an historical drama (1872), “Le Roi est Mort; Vive le Roi!” (1873), and “My Lady is a Widow, and Childless” (1874), “Sain et Sauf” (1875), “Rejected,” and “An Appeal for Mercy, 1793,” had places in 1876.

“Sacrifice,” a damsel burning love letters in the presence of an elderly admirer and a lady, and “Waiting at the Gate,” signalized the year of Mr. Stone’s election to the A.R.A.ship, and were succeeded by “The Post Nag,” “Head of a Girl,” “The Time of Roses,” and “The Fruit Seller,” all shown in 1878, and, in 1879, by “In the Shade,” “Summer Time,” and “Discord.”  In 1880 we remember “Olivia and Dick Primrose,” and “Amour ou Patrie;” in 1881 was exhibited “Married for Love,” and, in 1882, “Il y en a toujours un Autre,” which was bought by the Academy with the Chantrey Fund, “Bad News,” “The Foundling,” and “Miss Frances Sterling.”  Of last year the subjects were “An Offer of Marriage” and “Asleep.”  Mr. Stone has designed the illustrations of several books, including “Great Expectations,” “Our Mutual Friend,” and “The Child’s History of England,” by Dickens, Mr. A. Trollope’s “He knew he was Right,” &c. 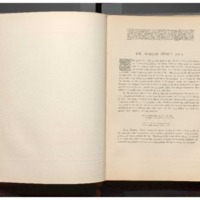