Millais was a child prodigy, destined for success as an artist from a young age. At nine years old, Millais earned a silver medal from the Society of Arts for a drawing from the antique; at eleven, he was the youngest person ever admitted to the Royal Academy Schools; at fourteen, he gained a silver medal for a drawing from a statue; and at eighteen, he won a gold medal for The Young Men of the Tribe of Benjamin seizing their Brides. In 1848, Millais and a group of like-minded colleagues formed the Pre-Raphaelite Brotherhood. In 1854, Millais married Euphemia (Effie) Chalmers and was elected an A.R.A. After his marriage he painted a number of portraits of notable persons, including W. E. Gladstone and Lord Lytton, and designed several book illustrations. In December 1863, he was elected a Royal Academician, and in the following years became an Officer in the Legion of Honor (1878) and was elected a member of the Institute of France (1882).

MEMBER OF THE INSTITUTE OF FRANCE, AND OF THE ACADEMIES OF EDINBURGH, ANTWERP, MADRID, AND ROME; OFFICER OF THE

AS the life of an artist is in his works, and Mr. Millais’s labours have been almost as numerous as his successes, the biographers of the painter find only too much material at their hands if, within narrow spaces, they attempt to produce just portraits of him.  It is therefore impossible to delineate him at full length unless what may be called a life-size canvas is available for the purpose.

A prodigy in childhood, as a youth the most prominent leader in a movement which worked wonders in the practice of art, a member of the Academy when some of his contemporaries were still in the schools, Millais is one of the few living men whose pictures appeal to us from the level of the great ancient masters.  A thorough painter per se and proper, whose technical skill is equal to a sixth sense, and, in being exhaustively artistic, is far more than merely scientific, this R.A. is among the fittest men in England to represent painting according to the illustrious mode of yore, when each master, as Titian, Raphael, or Velazquez did shone in the courts of kings, and was not of them. Add to these fine endowments indefatigable industry, the keenest sense of the logic of art, a noble physical presence, perfect savoir vivre, fidelity in friendship, and a genial manner that never tires, and we have the elements of that success which, by merely growing, assured its own magnificence.

So many concise studies and deftly-made sketches of Millais have been published that hardly any new thing is left for me to say.  That on the 8th of June, 1829, he was born in Portland Place, Southampton, was due to a concatenation of circumstances which determined he should not be a native of Jersey.  His mother (born Mary Evamy) was English to the heart; his father, John William, who belonged to an excellent old Jersey family settled at Tapon in that island, in the militia of which he was an officer, was hardly so much as half a Frenchman.  Of this union our subject is, by his mother’s second marriage, the second son and younger child.  His own elder brother is a well-known landscape painter.  The future “English Velazquez,” as, in regard to portraiture at least, he has been not unwisely called, lived in Jersey, till he was nearly six years of age, when the family removed to an old tower on the fosse at Dinan in Brittany, where some picturesquely-clad {16} French artillery officers fixed his attention so strongly that he concentrated on their portraits all the draughtsmanship which must have been already at his hand and latent in his mind.  He succeeded in these drawings to the astonishment of his models and some other French officers, who bet a dinner that he would not repeat the feat.  In 1837 Millais’s parents, anxious to decide the future of their son, brought him to England, where they settled, and shortly afterwards consulted Sir M. A. Shee, the P.R.A. of that day, on the subject.  Shee declared at once it was better to make a boy a sweep than indulge his inclinations for art.  When, however, some studies of Millais’s were shown to the P.R.A., his words were changed—“Make an artist of him, by all means,” he said. “Nature has provided for his success.”

Accordingly, the boy was placed in the most frequented drawing school of that day, which was established in Bloomsbury, and conducted by Mr. F. Sass, the first trainer of a very large number of painters.  He was succeeded by Mr. F. S. Cary, who taught in the same place.  In 1838, when he was only nine years old, and still younger in appearance, Master Millais received from the astonished Duke of Sussex, who adjusted his spectacles to look at the little boy approaching his rostrum to take the prize, a silver medal awarded to him by the Society of Arts, for an excellent drawing from the Antique.  In 1840, being the youngest person ever admitted to the schools, Millais became a Student in the Royal Academy.  A little later than this period the boy-painter used to take likenesses in oil for three, four, or five pounds each, and draw actors for ten shillings apiece.

In this stage Millais continued to draw diligently from the Antique, and, chiefly on account of his youth, did not enter the Life School at the Academy until after he had, in 1843, gained a silver medal for a drawing from a statue.  He received no more such distinctions until 1847, when, having entered the Lie and Painting Schools in the interval, he won the gold medal for an original picture in oil, the subject being “The Young Men of the Tribe of Benjamin seizing their Brides.” (This was shown at the British Institution in 1848.)  Millais had, however, already descended into the arena of art, and in 1846 attracted considerable attention to his prowess by means of “Pizarro seizing the Inca of Peru.”  At this time he was busy with the much more ambitious “Widow’s Mite,” a picture in oil, which, in 1847, had an honourable reception at the Westminster Hall Exhibition of works by artists competing for the decoration of the Houses of Parliament.  This was an astonishing achievement for a youth of seventeen, who designed its life-size figures with grace and spirit, and painted them with freedom approaching power.  This example measured 10 feet 7 inches by 14 feet 3 inches, and has since been cut in two; one half is now in Tynemouth, while the other is in America. In 1847 Millais contributed to the Academy a noteworthy picture representing Elgiva, wife of Kind Edwy, seized by Odo, which occupied a bad place in the second tier of the old Octagon Room in Trafalgar Square, and was sold for 120l.  He likewise painted for a house in Leeds four panels representing “Childhood,” “Old Age,” “Youth,” and “Manhood.”

In the early part of the year 1848, that friendly company, the renowned Pre-Raphaelite Brotherhood, of which Millais soon became the best-known member, was formed.  In {17} accordance with the views of this society his pictures assumed a totally new character, so that nothing could differ more completely from “Elgiva” than the production of the next year, which was named “Isabella” because it represents the banquet scene in Keats’s “Pot of Basil.”  Pre-Raphaelitism was neither more nor less than a protest of sincerity against the fatuousness of conventional art, which ruled before its inception.  It owed absolutely nothing but the example of sincerity to foreign or ancient artists of any kind; it illustrated that sincerity with greater devotion than any preceding mode of design, and produced nothing which is in the slightest degree like what had gone before it.  Nor did the works and technical motives of the brethren in any respect not controlled by their great rule of sincerity, bear the least resemblance to each other.  The effect of Pre-Raphaelitism on the practice of its professors was magical and revolutionary.  This is not the place to discuss its aims, characteristics, or stupendous effect.

Suffice it that, so far as Millais’s development and practice was concerned, his exhibited Pre-Raphaelite pictures are “Isabella,” “Portrait of a Gentleman (Mr. J. Wyatt, of Oxford), and his Grandchild;” “Ferdinand lured by Ariel” (for which I sat), “Christ in the House of his Father” (all at the Academy in 1850); “Mariana of the Moated Grange,” “The Return of the Dove to the Ark,” “The Woodman’s Daughter,” from Mr. C. Patmore’s poem (R.A. 1851); “Portrait of Mrs. Coventry K. Patmore,” “A Huguenot,” “Ophelia,” comprising a likeness of Mrs. D. G. Rossetti (R.A. 1851); in 1853 we had “The Order of Release, 1745,” comprising a likeness of the present Mrs. J. E. Millais, and “The Proscribed Royalist, 1651,” for which Mr. Arthur Hughes sat.  The small whole-length portrait of Mr. Ruskin standing near a waterfall was produced in 1854, after the last-named two pictures.  This is the outcome of Pre-Raphaelitism in Mr. Millais’s hands.  After “Ferdinand” appeared, the astonishing tenacity of the painter’s second manner was relaxed (so to say), step by step, in favour of a less stringent, but not less potent or brilliant mode: pathetic his art cannot fail to be, it is generally dramatic, “The Woodman’s Daughter” was begun before “Christ” made progress, so that it really preceded “Mariana” in the order of the painter’s technical development.  But the changes of his practice were not sudden in their effect.   “The Royalist” had its due sequel in “The Rescue of Children from a House on Fire,” painted in 1855, exactly as “Autumn Leaves,” “L’Enfant du Régiment,” “Peace Concluded” and “The Blind Girl,” productions of 1856, succeeded the resplendent so-called “fire-picture” of 1855.  In 1855 Millais exhibited portraits of “A Young Lady” and “Mrs. John Leach.”

In 1854 Mr. Millais was married to Euphemia Chalmers, eldest daughter of Mr. George Gray, of Perth; he was elected an A.R.A., being, except Lawrence, the youngest man who has attained that distinction, and he exhibited no pictures.

Mr. Millais’s house, a view of the studio in which is before the reader, was erected for him by Mr. Hardwick; he painted most of his early works in what is now No. 7, Gower Street.  He was chosen a Royal Academician in December, 1863; he obtained a French Medal of the Second Class in 1855, a Medal of Honour in 1878; he became an Officer in the Legion of Honour in 1878, and, in the place of Duprè, the Italian sculptor, was elected a member of the Institute of France (Beaux-Arts), in 1882. 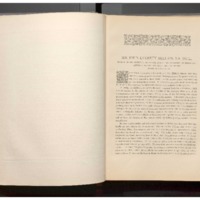