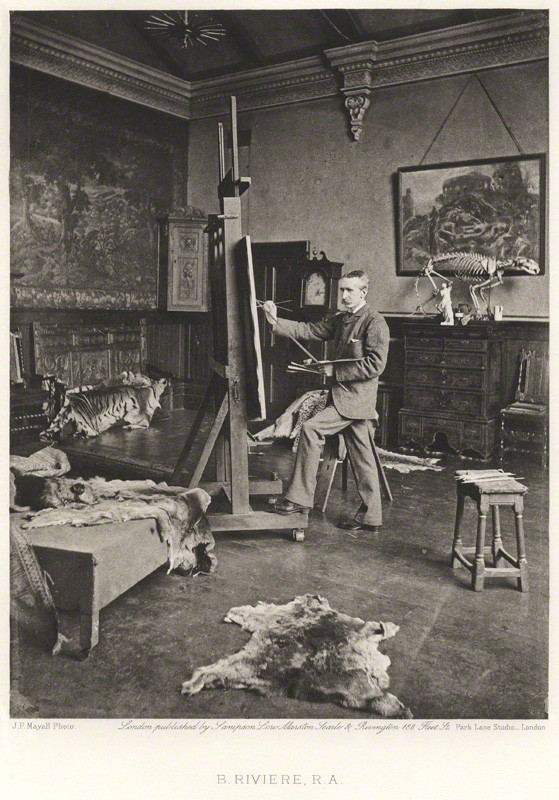 Briton Riviere, a popular Victorian animal painter, had his photo taken by J. P. Mayall’s apprentice Frank Dudman for Artists at Home in 1883. The portrait was made in Riviere’s own studio home, named “Flaxley,” at 82 Finchley Road in London. Riviere’s portrait was copyrighted on September 24, 1883, and the photogravure became part of the July 1884 installment of Artists at Home.

The studio portrait itself is distinctive, even though it follows the standard composition for Mayall’s set of portraits. Briton Riviere stands in the center of the composition. He appears to be lunging towards his easel, his foot propped up against one of its legs. The canvas faces away from the viewer so that its contents cannot be seen. Riviere wears a suit and dress shoes—presumably not the clothes he would typically work in, but donned for the purpose of the photograph. In his right hand he holds a paintbrush, apparently in the act of painting, while his left arm balances a palette and a mahlstick (a long rod used by artists to steady their hands during painting). To Riviere’s right sits a stool, parallel to the canvas, with paintbrushes arranged neatly on top. The studio itself looks luxurious, with shining hardwood floors, richly carved furniture, and elaborate molding along the ceiling. On the right wall hangs a framed painting, which appears to be an ancient Roman landscape featuring the Coliseum, but the painting is unidentifiable. On the left wall hangs a vintage verdure tapestry featuring a lush forest scene.

The studio’s most distinctive feature, however, is the animal-related décor. Riviere has five—perhaps more—animal skins of different species scattered around his studio. Two lie on the floor, as rugs, while at least three are draped on various items of furniture. Most impressive is the tiger skin draped across the bench in the background. Its arrangement—not flat, with its tail extending over the edge—gives the impression of a live tiger outstretched across the bench. Its placement below the verdure tapestry was possibly intentional, meant to evoke the image of a tiger stalking through a forest.

In addition to the animal skins, a complete skeleton of a leopard, one of the largest ever owned by the London Zoo,[1] stands on top of the dark wooden dresser behind the artist. The bones are positioned so that the skeleton appears to be loping across the surface, prepared at any minute to leap off the edge, almost as if alive. Either the photographer or Riviere himself must have arranged these elements to assert the artist's identity as an animal painter, as it seems unlikely that Riviere would have kept such fine decoration in his working studio.

One surprising detail is a tiny replica of the Venus de Milo or some other classical nude propped just in front of the animal skeleton. This odd juxtaposition may have been intended to suggest the way Riviere’s paintings sometimes contain interactions between animals and human figures from classical mythology. This is further evidenced by Stephens's biography of Riviere that accompanied his portrait, which highlights the artist as “one of those who has chosen to illustrate by many instances the affectionate relationship of animals and man.”[2] 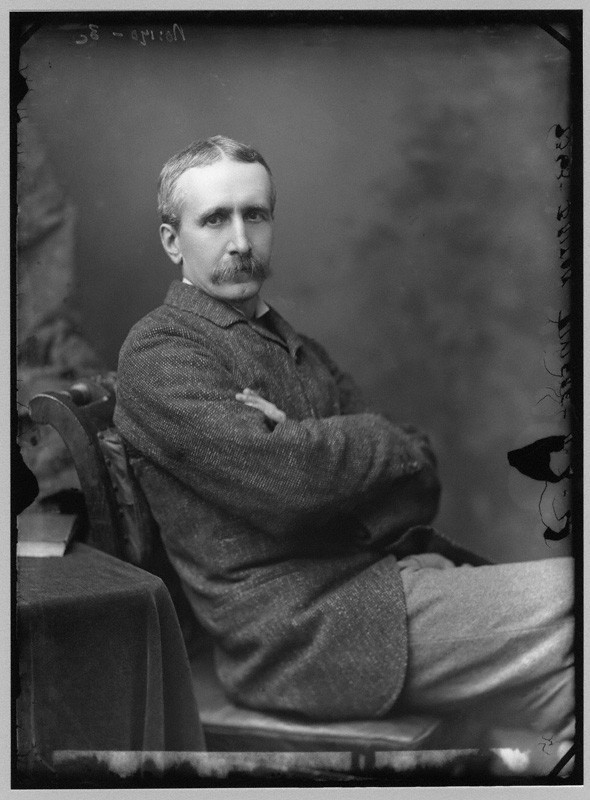 Just beyond the billiard-room is the studio. The door is opened by Mr. Riviere, who, beckoning me, in a peculiarly happy sort of way, pleasantly invites me to "come into my workshop."

"Workshop" is an exceedingly applicable name for the studio which has seen the birth of many of Mr. Riviere's pictures. It may at once be said that it is not the studio of a Leighton or an Alma Tadema. The floor is utterly devoid of luxurious and costly carpets and rugs. Dogs and horses, sheep and pigs, are not calculated to improve the quality of an expensive carpet, or to add to its lasting capabilities. The floor is elaborately decorated with scratches from many a dog's paw and horse's hoof. The walls are covered with beautiful tapestry. In a corner is the skeleton of one of the largest leopards ever housed at the Zoo; it was articulated at Oxford for its present owner. Casts of animals are everywhere, including one of a very fine black wolf; whilst at the far end of the studio is the skeleton of a deerhound, which the artist contemplates affectionately. "Bevis"--for so the hound was christened--belonged to one of Mr. Riviere's brothers-in-law, and obtained prizes in his day; he was one of the best models Mr. Riviere ever had.