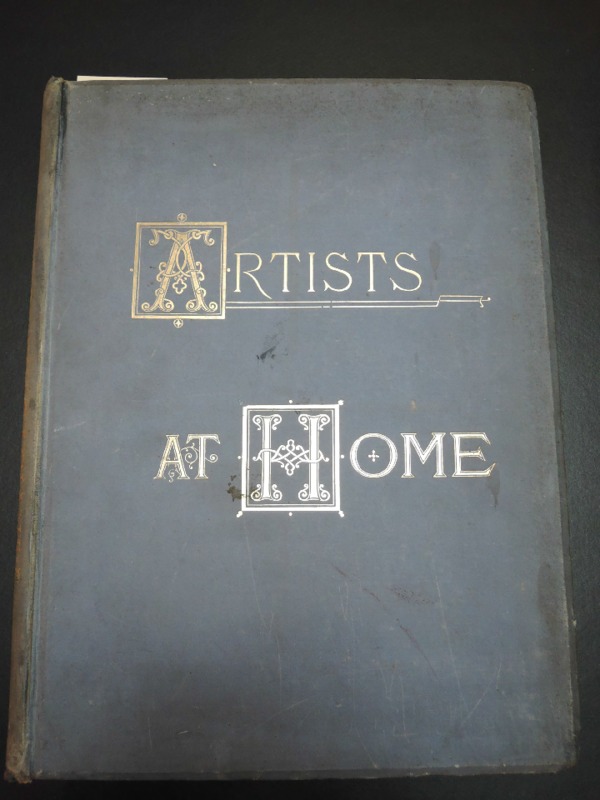 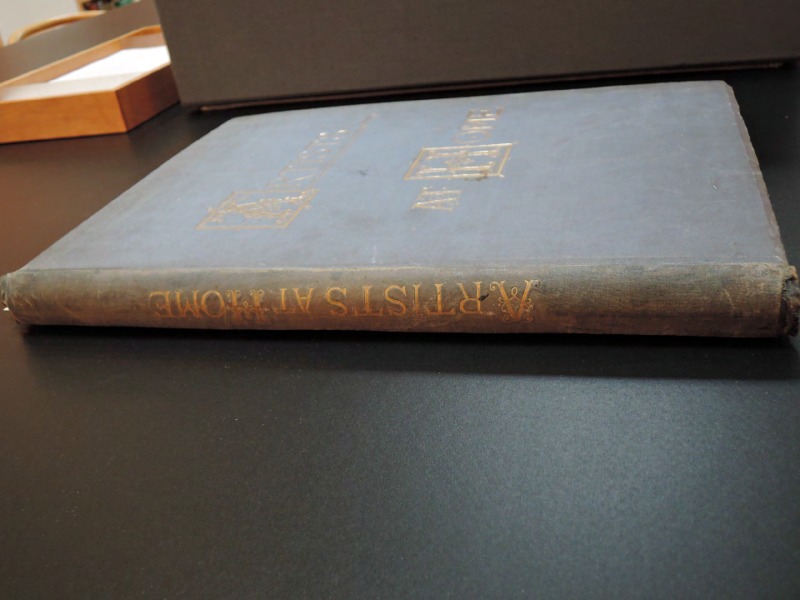 Artists at Home was published in 1884--in London by Sampson Low, Marston, Searle and Rivington, and in New York by Appleton & Co. Although we do not know the original print run, or the total number of copies that survive, we have identified three versions of the publication produced by the two publishers, with copies preserved at fifty locations worldwide.[1] From March of 1884 through August of the same year, Sampson Low produced two editions of unbound portfolios of prints, one an extremely rare, 48-centimeter “deluxe” edition, the other the standard 45-centimeter edition. The standard portfolio was made up of six fascicles issued in monthly installments, while the fascicles for the deluxe edition were all printed and distributed at the same time. At the end of 1884, both Appleton and Sampson Low published a bound book version of Artists at Home with blue covers and gold lettering (39 centimeters).

We have identified three different versions of the London publication, which survive in eighteen locations.1 Eleven libraries own the standard, portfolio edition (95 pages, 25 plates, 45 centimeters), including the National Art Library at the Victoria and Albert Museum in London;[2] five possess the deluxe edition (4 preliminary leaves, 95 pages, 25 portraits, and frontispiece, printed on 48-centimeter folio sheets); and many rare book libraries, including the Bibliothèque Nationale de France2 and the Canadian Centre for Architecture in Montréal, have the bound, 39-centimeter version with blue covers.2 According to WorldCat records, the bound edition published by Appleton & Co. of New York can be found at thirty-two locations, substantially more than its London counterpart. Unsurprisingly, all but one of those copies are held in the United States, the single exception being the Rijksmuseum Research Library in Amsterdam.[3]

The books are concentrated in England and the United States, with most in the libraries of educational institutions or museums, including the British Architectural Library at the Institute of British Architects, the National Gallery of Art Library (Washington, DC), the Brooklyn Museum Libraries and Archives, the New York Public Library, and the libraries of various universities. But this tribute to Victorian painters can also be found in libraries around the world, including the Artesis Plantjin Hogeschool Antwerp in Belgium, the National Library of Scotland, and the Deakin University Geelong in Australia.

From the beginning, Sampson Low planned to produce a more expensive and exclusive portfolio or prints. As the earliest advertisements for Artists at Home announce,

It is further intended to print a Superior Edition on india paper, mounted on papier de Hollande, and of royal folio size, which will be limited to One Hundred Impressions taken from each plate before the lettering is engraved upon it: Fifty of which will be reserved for American subscribers. This edition will be published at Ten Shillings and Sixpence each Part,[4] and supplied only to subscribers for not fewer than TWELVE MONTHLY PARTS, beginning with a volume.[5]

After that initial offering, the “Superior Edition” was not advertised again, but a 1918 catalogue of the book dealer Henry Sotheran & Co. confirms that such a publication, with “Proofs on India Paper, roy[al] Folio,” was in fact produced. The covers would have been around 51 centimeters high, roughly corresponding to five of the extant copies.[6]  Perhaps the most valuable of those is the portfolio in Special Collections, Mariam Coffin Canaday Library at Bryn Mawr College, which is inscribed “Artist’s proof No. 57.” The loose plates and bifolio sheets are housed in a yellow cloth portfolio stamped with the title, in gilt, on the front cover and secured on three sides with black ribbons. The other “Superior” copies are held by the Princeton University Library, the Sterling and Francine Clark Art Institute Library, and the National Library of Scotland in Edinburgh.

The Emory copy that inspired this website is housed in the Stuart A. Rose Library of Manuscripts, Archives, and Rare Books at Emory University, Atlanta. It was, we believe, the standard 45-centimeter portfolio produced by the London publisher. The same edition, consisting of 25 unbound leaves of plates, is available at ten other locations in the United States and England, including the Detroit Public Library, the Cambridge University Library, the National Art Library, and the British Architectural Library, but the Emory copy is incomplete, with only 21 plates. It was donated to Emory in 2011 by Cara Polk, the wife of James Polk, then the executive producer at CNN. Kim Collins, the Art History and Classics Librarian at Emory, has not located documentation pertaining to Mrs. Polk’s acquisition of the portfolio, but she does recall that the donor had received it from her great-aunt, who had purchased it in London many years earlier.[7] The Rose copy, unbound and imperfect, is also missing the biographical notes by F. G. Stephens.[8]

In September 1887, Sampson Low, the London publisher, auctioned thousands of books in preparation for a move to new premises. An advertisement for that sale indicates that the publisher still had forty-seven standard copies of Artists at Home, which it was prepared to sell at £2 2d, approximately $269 in today’s currency; and twenty-five copies on “large paper,” at £3 13s. 6d (or $492).[9] Because the advertisement mentions two editions, and because the price of the more elaborate copies is so high, this must refer to portfolios of prints (“leaves of plates”), rather than bound volumes. Even so, the publication was costly and remains relatively rare. Today, with only about fifty copies held by rare book collections around the world, we can recognize Artists at Home as a valuable resource, giving insight into contemporary depictions of Victorian artists and nineteenth-century photographic practices. Fortunately, the American publication is accessible online, through the HathiTrust Digital Library, and now on this very site.