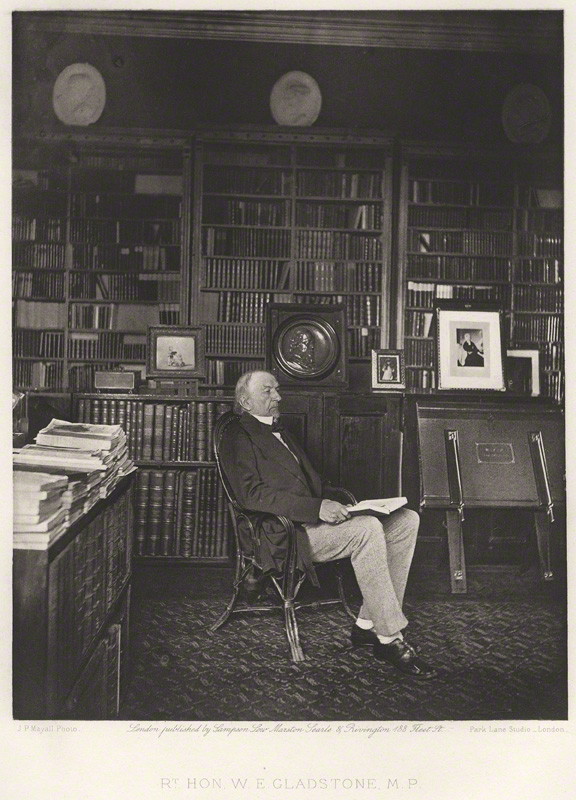 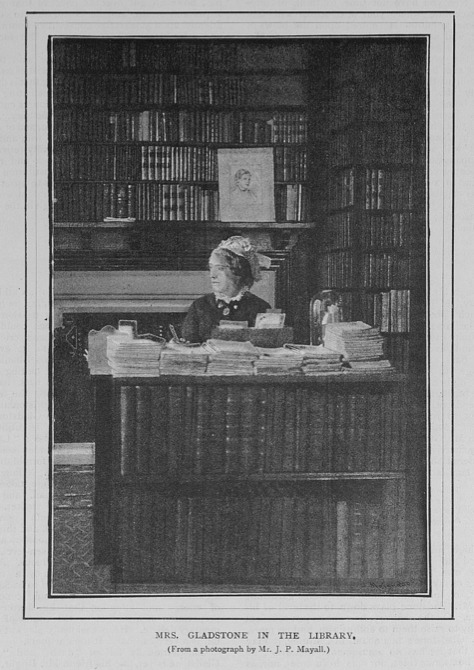 This portrait of William Ewart Gladstone (1809–1898) was taken by Joseph Parkin Mayall (1839–1922) in January or June 1884 in the library of Gladstone's home in Wales, Hawarden Castle, and published in August 1884 in Artists at Home. The castle housed Gladstone’s precious study, known as “The Temple of Peace,” the room in which Gladstone sits for the photograph.[1]

Surrounded by towering shelves holding thousands of precisely arranged literary works from a myriad of eras and genres, the seventy-four-year-old Gladstone rests an open book in his lap as he stares into the distance, a stern expression on his face. Regarding Gladstone’s meticulously ordered bookshelves, J. P. Mayall recalls, in his only published work, which recounts his photography session with Gladstone in 1884, “A massive bookcase in the centre of the sitting-room contained a variety of superb editions of Dante arranged by Mr. Gladstone’s own hands.” A self-proclaimed bookworm, even Mayall was amazed at Gladstone’s astounding collection of books, all chosen by the prime minister himself, testifying to his vast intellectual ability. In the portrait, Gladstone sits tall in a chair turned slightly to his left, his erect posture signaling authority. The position of his head mimics the bronze-cast medallion portrait of himself propped on the shelf behind him, created by the sculptor Thomas Woolner (1825–1892), a contemporary of Gladstone’s at the Royal Academy. Although he was prime minister of the United Kingdom at the time of the photograph, Gladstone is dressed casually, not wearing his usual suit. His receding grey hair is carefully combed without a strand out of place, perhaps the doing of Mrs. Gladstone, whose devotion to her husband was noted by Mayall: “Now Mrs. Gladstone told me that she wished to prepare Mr. Gladstone for the ordeal of being photographed, shall I say, for the thousand and first time.” Despite Gladstone’s stern exterior, the prime minister, just like any other citizen, sought relaxation and casual comfort in his own home.

An element of order is imposed on the composition of the photograph by the equal spacing of three marble medallions atop the largest bookshelves. The heavy stacks of unbound papers in the foreground may represent Gladstone’s many literary works and speeches on politics and ancient history. Framed photographs line the smaller bookshelves in front, perhaps signaling Gladstone's interest in photography. The small, framed photograph of a young girl to the left of Gladstone may be of one of his grandchildren, as other family portraits survive. The larger framed and matted work propped on a table to Gladstone’s left may be the photograph of Mrs. Gladstone taken by Joseph Parkin Mayall on a visit to Hawarden Castle in June 1884. “Having been honored with a separate sitting by Mrs. Gladstone on my first visit,” Mayall writes, “I had a life-size enlargement done from the negative; this I took with me on my second visit.”

Gladstone's sitting to J. P. Mayall generated more publicity for Artists at Home than any other episode in the life of the publication. The notices began on January 19, 1884, four days after the photographer's first visit to Hawarden Castle, providing an advance advertisement of a publication that would not commence until March. The news appeared in The Morning Post (London), the Birmingham Daily Post, and The Leeds Mercury, and probably a great many other British papers. Then in June it all began again. The most extensive account was published in the Daily News (London) on June 12, 1884:

THE PREMIER.—Mr. J. P. Mayall, Park-lane Studio, has recently been honoured with sittings form the Prime Minister during his recent visit to Hawarden. A photograph of Mr. Gladstone in his library at Hawarden Castle is intended for publication in “Artists at Home,” a work dealing chiefly with the Royal Academy, now being issued by Messrs. Sampson, Low, Marston, and Co. Mr. Gladstone, as Professor of Ancient History, comes in the series. Mr. Mayall was likewise honoured with a sitting from Mr. Gladstone for a Rembrandt photograph as a companion to a life-size one of Mrs. Gladstone, taken by Mr. Mayall last January, of which Mr. Gladstone had been pleased to express his approval. Several members of the family gave sittings, including the Rector of Hawarden and Mr. and the Hon. Mrs. W. H. Gladstone.

In his own retrospective account of the visits to Hawarden Castle, Mayall confuses the date, recording it as January 15, 1883, when in fact it it took place in 1884. But he also manages to elide the two sessions so that it is almost impossible to disentangle them enough to determine which one yielded the final photograph of Gladstone. Presumably it was the second: surely Mayall would not have repeated the expensive, six-hour journey from London if the results of his previous visit had been satisfactory. It is reasonable to assume that he did not want it known that his first try had failed, requiring the busy prime minister to be subjected to another sitting; word of the "Rembrandt portraits," which can only have come from Mayall himself, may have been emphasized to provide an additional justification for the return trip.  Those pictorial photographs have never been identified, so we may never know whether Mayall succeeded in his ambition, or if, in fact, the portraits were ever made. Similarly, there is no evidence of Mayall's photographs of other members of Gladstone's family, although they may eventually come to light.

The photograph of Gladstone in the library at Hawarden that was published to accompany Mayall's account is slightly different from the one reproduced as a photogravure in Artists at Home, but it was undoubtedly made at the same time. 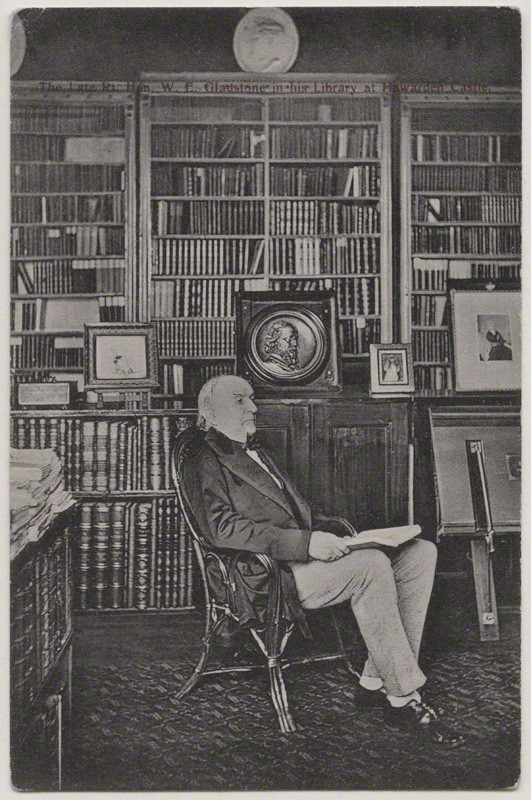 This postcard, which can only be dated to the twentieth century, is evidence that Mayall's hard-won portrait photograph of Gladstone had an afterlife. The Mayall print has been cropped to provide a detail more focused on the prime minister, with less of the library in view.