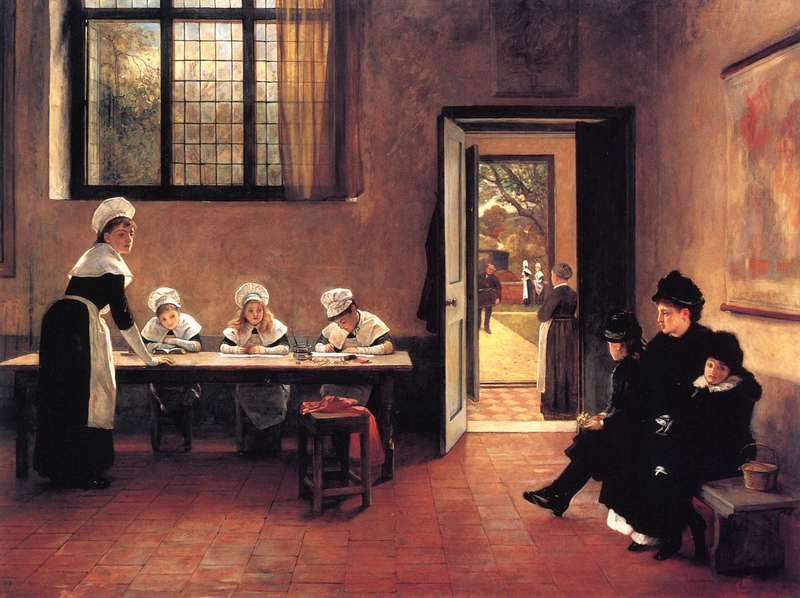 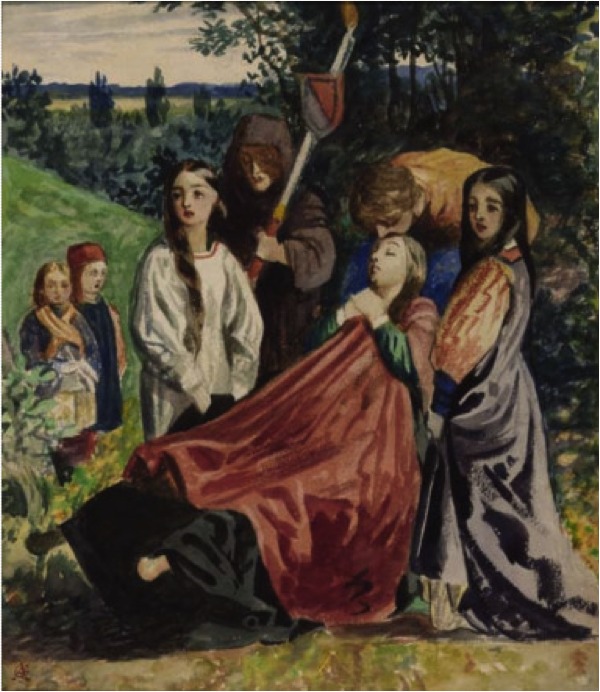 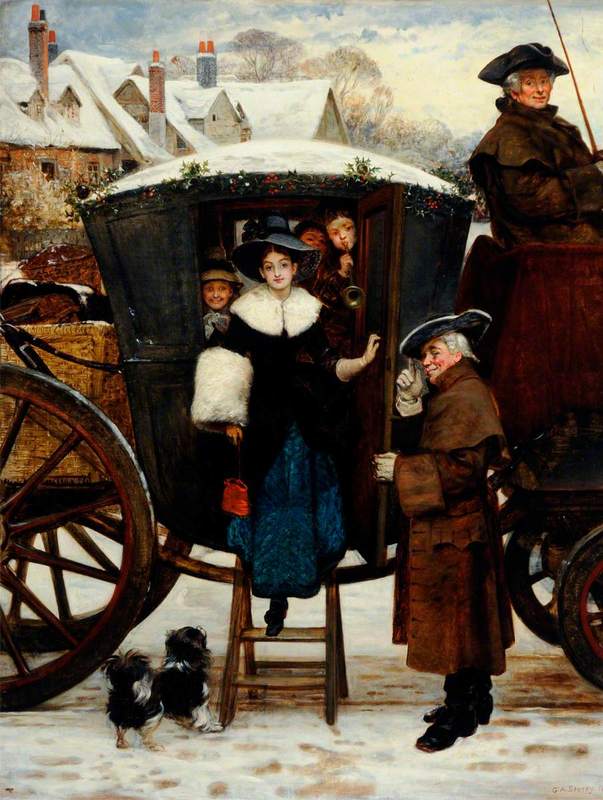 George Adolphus Storey, son of James Payne Storey,[1] was born in London on January 7, 1834. He moved to Paris with his elder brother, William, at age fourteen, in order to study painting and complete his education; there, he trained with Jean Louis Delong.[2] Near the end of 1849, Storey returned to London and began to study under the English artist James Mathews Leigh. He exhibited at the Royal Academy in 1852-53, and was accepted to the Royal Academy schools in 1854.[3] The Pre-Raphaelite Brotherhood influenced much of Storey’s early work, though his subject matter was criticized as “too much and too varied.”[4] His early paintings, such as The Bride’s Burial (1859), were so promising that some considered him a rival to Millais. However, Storey later abandoned Pre-Raphaelitism, which he felt was not a lucrative approach to painting.[5]

During the 1850’s Storey lived at his parents' home at 12 Marlborough Place,[6] and became acquainted with the future members of the St. John’s Wood Clique, including his future brother-in-law, Philip Hermogenes Calderon.[7] After traveling in Spain in 1863, Storey became a founding member of the Clique.[8] He met lifelong friends there, and the artists traveled together occasionally; they remained friends even when Storey no longer officially qualified as a member because he had moved away from St. John’s Wood. In his early adulthood, Storey had a relationship with a woman named Frances, or Fanny (c. 1843–1914). They never married, but in 1866 had a son they named Robert Oliver Storey. They lived together for most of the 1870’s, but ultimately separated in 1877.[9] Afterward, Storey fled back to St. John’s Wood to live near his old friends at 19 St. John’s Wood Road.[10]

In 1876, the Royal Academy elected Storey as an associate, and he began teaching perspective. He traveled around Europe giving lectures on the subject, but occasionally presented them in his own home. In 1882, Storey met his future wife, Emily Hayward (d. 1940), who often posed for his pictures. She is pictured in Storey’s Artists at Home portrait by J. P. Mayall in 1884, and in another albumen print by an unknown photographer taken in 1883, in which she seated beside Storey in the garden, apparently wearing the same dress and hat. In 1886, Storey had his first child with Emily, a daughter named Mary Gladys Storey (d. 1978), who eventually became an actress. Storey himself died at his Hampstead home, 39 Broadhurst Gardens, at the age of 85.[11] 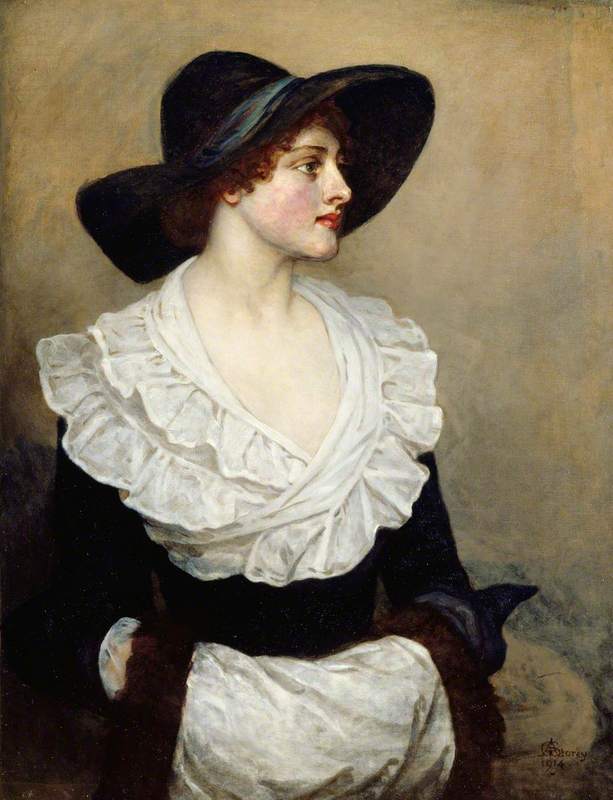 Storey was a prolific painter who specialized in historical genre paintings, the typical subject matter of the St. John’s Wood Clique,[12] and portraits. Despite producing many historical paintings, Storey found them troublingly artificial. He admired artists such as Velázquez, who  had a “hand in the history,” so to speak, with such works as Las Meninas. To Storey, a historical painting created by someone not from that time period could never be truly authentic.[13] Critics praised Storey’s portraits--"of which he produced a large number”--as “careful and conscientious, with his best work having “a considerable power both of drawing and painting.”[14] Meynell enjoyed the “delicacy and beauty” in Storey’s work, which borrowed from seventeenth-century Dutch technique, and claimed that it possessed “indulgent sympathy for human nature” and was “free from everything that is bitter or sardonic.”[15] Many of his most popular paintings were portraits of pretty women, such as My Lady Belle (1876) and Lillies, Oleander, and The Pink (1879).[16] Fond of poetry, Storey published The Poems of George Minimus in 1863, followed by Homely Ballads and Old Fashioned Poems in 1879.

In his later career, Storey continued to paint but also worked on books, publishing two of his own, which are still read to this day despite Storey’s relative obscurity as a painter. The first, published in 1889, was his autobiography, Sketches in Memory, apparently pieced together from his diaries, with illustrations by himself. Contemporary critics described Sketches in Memory as “not thrilling, but . . . mildly entertaining.”[17] The second book, which ultimately became more famous, is The Theory of Practice and Perspective, published in 1910. Finally, in February 1914, at age 80, Storey became Professor of Perspective at the Royal Academy and was elected a full Academician that May.[18] At age 85, on July 19, 1919, Storey died in Hampstead.

[10] Milner and Morris,  "And When Did You Last See Your Father?" 33. The London census confirms these details. In 1871, George Adolphus Storey, age 37, was living at 25 Bridge Road in Hammersmith; he is listed as the head of the household, with the occupation "Artist-Painter." Frances Storey, age 27, is listed as his wife, and Robert Oliver Storey (age 4) as his son. The household included one domestic servant (UK Census Online, London census transcript for 1871). Robert O. Storey's birth was recorded in the district of Kensington between July and September 1866 (UKCensus Online, birth record). By the time of the 1881 census, Storey, age 47, was living as a bachelor at 19 St. John's Wood Road, with two domestic servants.