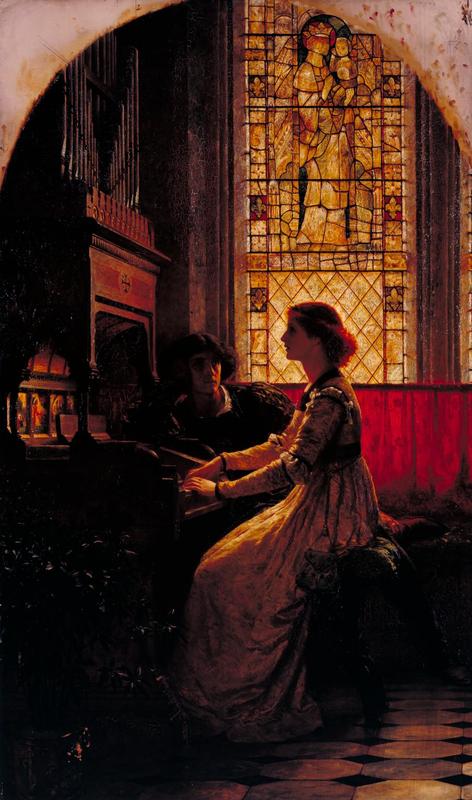 Frank Dicksee was born in London on November 27, 1853. He was the elder son of the painter and illustrator Thomas Francis Dicksee (1818-1895), and from his father Dicksee received lessons in art before he was taught anything else. “I cannot remember the time when I didn’t draw,” Dicksee once remarked.[1] His education began in 1870 at the Reverend George Henslow’s school in Bloomsbury. While still a student, in 1872, he exhibited at the Society of British Artists in Suffolk Street. At sixteen, after five years at the Rev. Henslow’s school, Dicksee left to study in preparation for entering the Royal Academy schools, successfully enrolling before his seventeenth year.[2] He showed promise, and in 1872 earned a silver medal from the Academy, followed by a gold medal in 1875 for Elijah confronting Ahab and Jezebel in Naboth’s Vineyard. Dicksee exhibited regularly at the Royal Academy from 1876.

Dicksee also devoted himself to illustration work for magazines such as The Cornhill, Cassell’s, and the Graphic.[3] His best-known illustrations, however, are for Longfellow's Evangeline (1882) and Cassell’s “royal” edition of Shakespeare’s Romeo and Juliet (1884). Several of his woodcut illustrations for the Cornhill Magazine are now in the Victoria and Albert Museum.[4]

While his early success stands out, Dicksee’s most notable work, Harmony, was selected as “picture of the year” at the Royal Academy in 1877. Although the Hanging Committee had seen only one other of his works, Harmony was given a place of honor in the center of the first room of the exhibition.[5] Dicksee was only twenty-three when this work won a gold medal.[6] It was subsequently purchased for the nation by the Royal Academy with the Chantrey Fund.[7] This purchase was significant not only in Dicksee’s life, but also in the history of the Royal Academy, as it was one of the first of its kind.[8]

In January 1881, Dicksee was elected an Associate of the Royal Academy, making him the youngest of its members. Despite his age, his work was highly acclaimed. When, for example, William Eastlake saw The Symbol in Dicksee’s studio, he remarked, “I have seen nothing to approach that in colour and power in any of the studios I have visited. It reminds me of the work of the old Venetians.”[9]

The next year, Dicksee exhibited one of his most poetic works, A Love Story, followed in 1883 by the largest work he had yet produced, Too Late. Dicksee had begun to establish himself as an admired painter, settling into a more conventional groove. His popularity was mounting. As Wilfred Meynell recalled, “‘What does Frank Dicksee exhibit this year?’ [was] a question so frequently asked after the opening of each recurring exhibition at Burlington House, that this fact alone is a sufficient testimony to the prominent position attained, at a comparatively early age, by the young Associate member of the Royal Academy.”[10]

Despite Dicksee’s rapid production, his earliest works continued to receive recognition. As late as 1902, his 1877 painting Harmony was still a popular feature of the National Gallery of British Art, charming “‘the man in the street’ and the connoisseur alike,” as one critic observed:

This beautiful work, so original in subject and treatment, so instinct with true poetic feeling, must be still vividly remembered by all who saw it on the Academy walls. The girl seated at the organ, the lover listening in rapt attention, the glory of evening light through the stained-glass window forming an aureole round the girl’s glistening hair, the subdued but beautiful colour, the carefully finished yet not too prominent details, all formed a veritable poem on canvas, bringing indefinite association with Adelaide Procter’s “Lost Chord” and—“A twilight song; while the shadows sleep / Dusk and deep;” and, indeed, with all beautiful abstractions, whether of music, poetry, or painting.[11]

Writing in 1886, Meynell predicted that “Frank Dicksee should have a great future before him”: “With his intense devotion to his art, with his conquest over technical difficulties, with his fine poetic commonplace, we may look with confidence to the production of a long list of good works. Judging by what he has done, it is safe to assert that there is no painter living who has a more refined feeling for art.”[12] Indeed, having been elected an Associate of the RA in 1881, he became a full Academician in 1891, and in 1924 Dicksee’s career reached its peak with his election as President of the Royal Academy, a post he held until his death on October 17, 1928. As PRA, Dicksee became an outspoken critic of modernism, and although he held the post with dignity, critics often dismissed his own work as outdated and irrelevant, despite its popularity before 1914.[13]