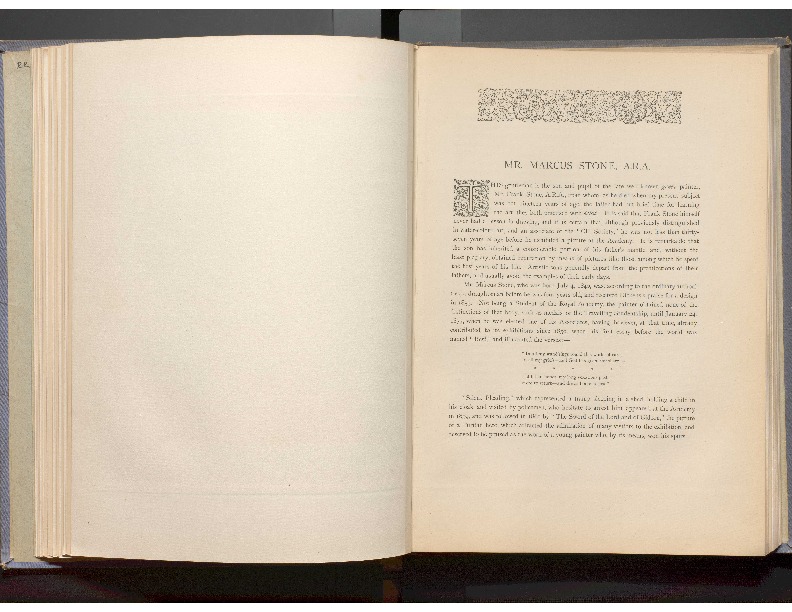 F. G. Stephens introduces Marcus Stone as the “son and pupil of the late well known genre painter, Mr. Frank Stone, A.R.A.” (1800–1859), a self-taught genre painter who died when Marcus was nineteen years old. Born in London on July 4, 1840, Marcus Stone exhibited skill as a draughtsman from a young age--"according to the ordinary authorities," as Stephens puts it, ". . . before he was four years old." His father was a friend of Charles Dickens, and Marcus would eventually contribute illustrations to Great Expectations, Our Mutual Friend, and The Child’s History of England. Though not formally trained, Stone grew up observing his father in the studio. "It is remarkable," Stephens remarks, "that the son has inherited a considerable portion of his father’s mantle, and, without the least plagiary, obtained reputation by means of pictures like those among which he spent the first years of his life.  Artistic sons generally depart from the predilections of their fathers, and usually avoid the examples of their early days." Marcus also took life-drawing classes with the likes of Augustus Egg and William Holman Hunt, details unaccountably omitted from Stephens's biographical sketch of the artist. 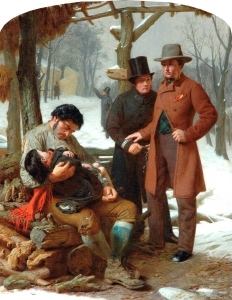 M. Stone, Silent Pleading, painted in 1858, when the artist was 18, and exhibited at the RA in 1859. Stephens describes the scene as "a tramp sleeping in a shed, holding a child in his cloak, and visited by policemen."

Stone was elected an Associate of the Royal Academy in 1877, after submissions to the Academy worthy of “admiration” -- Silent Pleading (1859) and The Sword of the Lord and of Gideon (1860). This success came after the death of his father, when, according to Stephens, he exhibited “extraordinary facility in what may be called the clearest reading of his subjects.” Stone’s first submission to the Academy was Rest, in 1858, when he was only seventeen. Stephens admires, and gives the most attention to, Stone’s astonishing precocity and doesn’t go into much detail about the artist's adult life, acquaintances, or custom-built studio home, indicating that the two did not have a close relationship.

Stephens’s apparent intention is to provide an index of the artist’s works and to recount his accomplishments. The artist’s most notable success to date was the Royal Academy’s purchase, with the Chantrey Fund, of Il y en a toujours un Autre (A Prior Attachment). Stone specialized in history and genre painting but eventually shifted towards more romantic and sentimental scenes of everyday life. These scenes were more accessible to the public and brought him a good deal of success, which Stephens doesn’t discuss in these pages.

Stone continued to exhibit at the Academy every year until 1920. He was admitted to the Royal Academy as a full member in 1886, two years after Artists at Home was published.