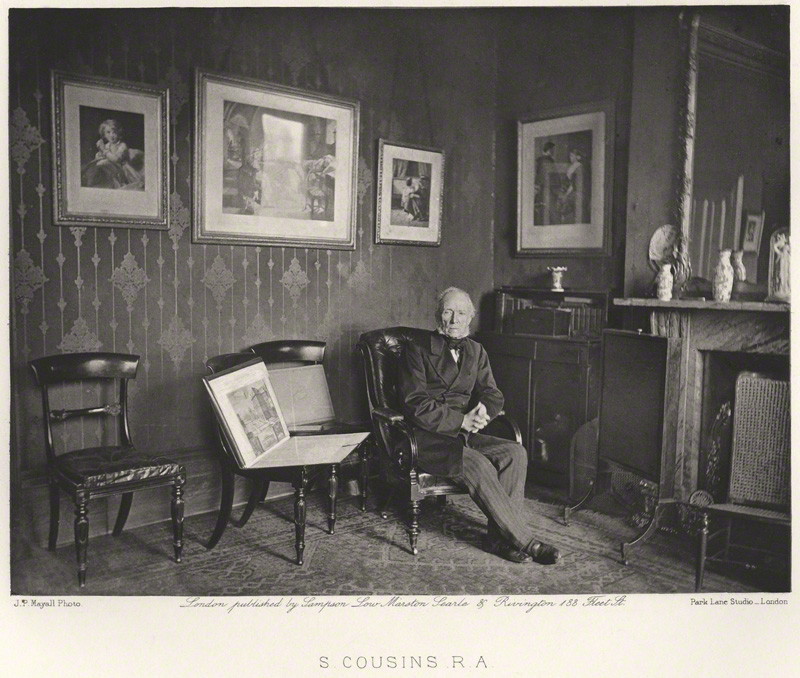 In 1883, the photographer J. P. Mayall had called on 24 Camden Square, London, the residence of a renowned English engraver, Samuel Cousins. In the sitting-room of the artist’s home, Mayall made this portrait of the artist, which was published in Artists at Home in April 1884.

Turned toward the viewer, Samuel Cousins nevertheless looks past her, as though something behind her shoulder has brought this contemplative expression to his face. His pose, comfortable but artificial, along with his position in the center of this spacious sitting room, gives him an almost regal air at odds with his sober costume. Every element in this composition accentuates his importance. The only person in the room, he is seated in an armchair, which, according to courtly hierarchy, necessarily grants him a higher status than that of the viewer, who is given a choice between standing or sitting in one of the armless chairs reserved for those of lower rank. The geometry of the photograph also highlights the sitter’s significance: the direction in which he has turned his head is parallel to the left wall and is practically on the axis created by the corner — the main vertical line of the composition.

The sitting-room where we find Cousins is well-appointed and displays the usual furnishings of a Victorian middle-class home. The marble mantelpiece, over which hangs a large mirror in a gilded frame decorated with floral patterns, the elaborate wallpaper, the large rug, the East Asian vases and fan, the numerous books — all speak to a home whose wealthy owners are sensitive to contemporary fashion.

Framed engravings on the walls behind Cousins, no doubt works by the artist himself, complete this image of an affluent Victorian dwelling. The engraving after John Everett Millais’s Yes, which hangs closest to the fireplace, may betray Samuel Cousins’s susceptibility to Victorian sentimentality. It certainly distinguishes him as a man interested in the art of his contemporaries. Immediately above Cousins hangs an engraving after Charles Leslie’s A Mother and Child, an interesting choice considering that Cousins himself never married and had no children. The largest of the reproductions is of Marie Antoinette and Louis XVI in the Prison of the Temple by Edgar Melville Ward; this choice is also curious because Cousins had made several engravings of Victoria’s portraits but for the decoration of his sitting-room he chose an image of the former French royal family, who had been executed over a century earlier. The last of the reproductions is after James Sant’s Speak Lord For Thy Servant Hears, also known as The Calling of Samuel. All these engravings reproduce paintings that were extremely popular during the Victorian era, partly because Cousins’s engravings made them so.

The most intriguing element of this setting is the engraving in the folder on a chair next to Cousins. Its placement so close to the sitter suggests that he was contemplating it before his attention was diverted (though not entirely, as we may surmise from his faraway gaze) by the photographer. The engraving is either a copy of, or the original by, Jacobus Harrewijn (1660-1727), a Dutch engraver, after Jacques van Croes’s  drawing of Peter Paul Rubens’s house.[1] As he poses for the photograph, his hands unable to keep still, Samuel Cousins may be thinking of that giant of the Baroque, whose house he had just been contemplating. We are also presented with the theme of Artists at Home. The reproduction of Rubens’s house, which the artist had designed and built with enormous dedication and care, recalls Mayall’s project of creating likenesses of his contemporaries who had, much like Rubens, invested considerable thought and effort into the making of their homes.

[1] One of the surviving examples is currently located in Rubenshuis (Rubens House) in Antwerp, Belgium. 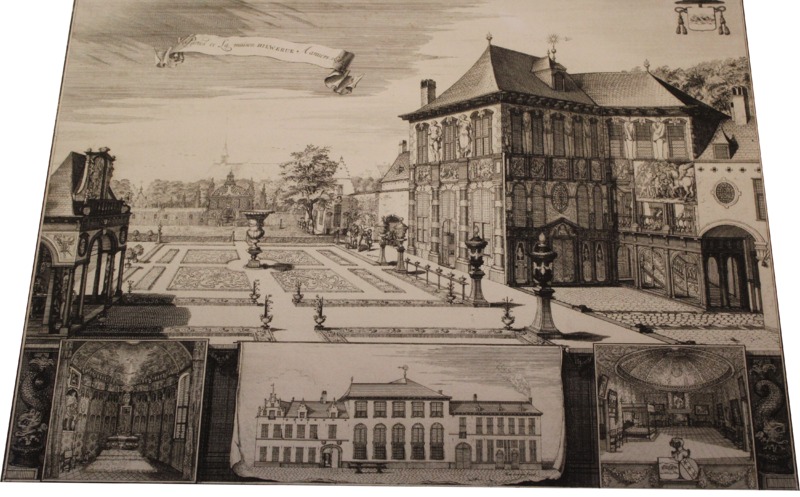 Engraving by Jacobus Harrewijn after a drawing of Peter Paul Rubens' house by Jacques van Croes.