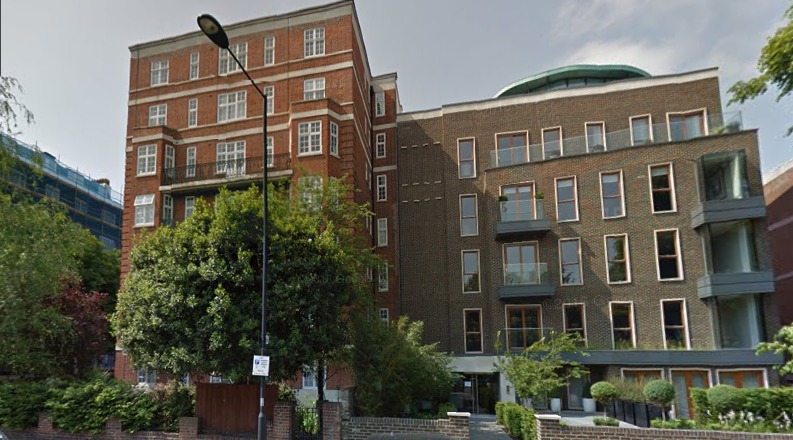 Philip Hermogenes Calderon lived at 16 Grove End Road in St. John’s Wood from 1876 to 1886, followed by a move to Burlington House in Piccadilly, where in his capacity as Keeper of the Royal Academy he occupied the official residence. The St. John’s Wood neighborhood was known as a place of “faint impropriety” because of the number of “kept” women thought to reside there, but artists had always lived there, with more flocking to the neighborhood in the 1850s and ‘60s, thus improving its reputation.[1]  The artists William F. Yeames, George D. Leslie, George A. Storey (Calderon’s brother-in-law), and John Hodgson were neighbors and founding members of the St. John’s Wood Clique, a “latter-day Pre-Raphaelite Brotherhood.” These men enlarged the homes already present in the neighborhood, and Calderon had a large annex built onto an existing house, previously owned by the portrait painter and copyist John Jackson.[2] Calderon’s home was admired for its luxurious interior, warranting mention by the artist and critic Philip Gilbert Hamerton in a letter to his wife: “Calderon’s studio that I saw a few days ago is richly tapestried and very lofty; it is quite as fine as that of Millais. . . . All these artists . . . complain of nothing but the too great prosperity of the profession in these days; they tell me an artist’s life is a princely one now. They live and dress like gentlemen, and their daughters might be ‘clothed in scarlet.’”[3]

Many London artists gravitated towards the architect Thomas W. Cutler for his understanding of the Queen Anne-style, popularized in Kensington, with its red-brick exteriors, white wooden detailing, and towering chimneys. In this neighborhood, however, the custom studio-home was rare, although like Calderon, artists often adapted the houses to suit their needs. When Calderon’s close friend Lawrence Alma-Tadema moved into the house formerly owned by J. J. Tissot, Tadema commissioned Calderon’s architect son, Alfred, to design additions and changes to the house to fit his family and ambitions, which took ten years to complete.[4] Philip Calderon’s own house was right next door.

Calderon's brother-in-law, G. A. Storey, wrote a tribute to the artist in 1898 in which he speaks of a series of decorative works including The Olive, The Vine, Flowers of the Earth, "and four or five others of a similar character" exhibited in 1881. These were all painted in Calderon's studio in his  Grove End Road home, "where there was not only a fine studio, but ample room in the grounds for lawn-tennis and such-like games, in which Calderon himself took the greatest pleasure." G. A. Storey, "P. H. Calderon," Magazine of Art 22 (1898): 450/52.