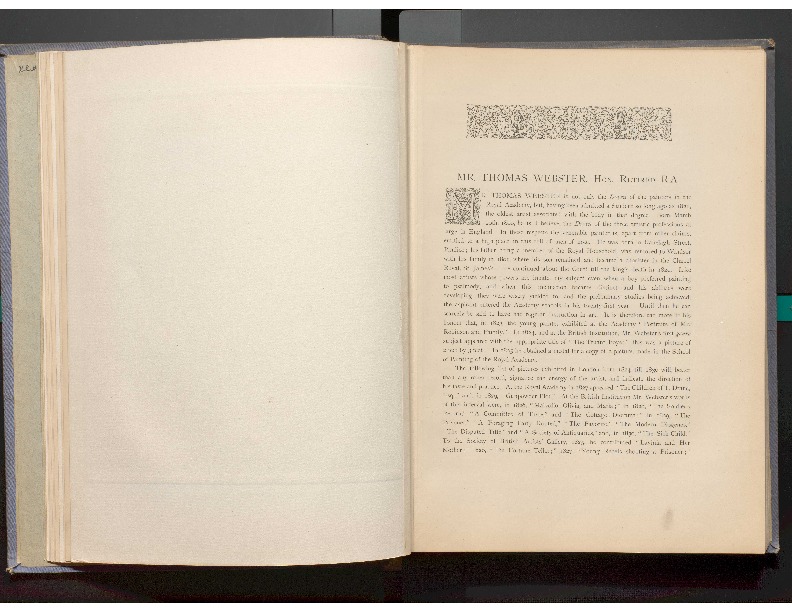 Stephens opens his biographical sketch by informing the reader that Thomas Webster was “the Doyen" not only of the Royal Academy, but also of "the three artistic professions at large in England," an indication that the writer considered him to be the most prominent and respected of British artists. He recognized, moreover, that Webster was the eldest figure in Artists at Home. The artist was in fact eighty-four in 1884, having been born in the first year of the century.

Stephens introduces the artist's biography with the interesting note that as a chorister at Windsor, Webster's early artistic ambitions were musical, but at the age of twenty-one he discovered his true vocation, evident in his inborn artistic skill:

Like most artists whose powers are innate, my subject even when a boy preferred painting to psalmody, and when this inclination became distinct and his abilities were developing, they were wisely yielded to, and the preliminary studies being achieved, the aspirant entered the Academy schools in his twenty-first year. Until then he can scarcely be said to have had regular instruction in art. 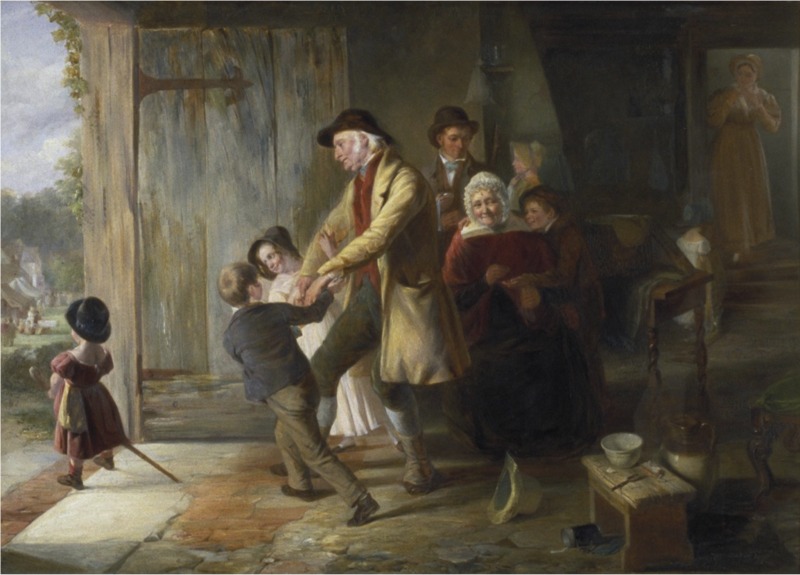 T. Webster, Going to the Fair, 1837, one of the paintings mentioned by Stephens that was then in the South Kensington Museum (now the Victoria & Albert).

A detailed list of Webster’s works up until 1830 would "signalize the energy of the artist," Stephens believed, "and indicate the direction of his taste and practice." Even without accompanying illustrations, the titles do suggest Webster's thematic predilection: "It will be observed that nearly all these subjects comprise children, and that the choice of such themes has been maintained by the artist till recent times." He continues to list titles, which this case tell us quite a lot about Webster's paintings, or at least their narrative, often sentimental subject matter, frequently mentioning that one or another was in the collection at South Kensington (now the Victoria & Albert Museum). And although Stephens notes all the necessary biographical facts—date of birth, schooling, awards—he devotes more than half of the biography to words of praise. Stephens also refers to the artists who had engraved Webster’s paintings for reproduction, another source of his renown.

In only two pages, Stephens manages to pack an entire lifetime of Webster’s accomplishments. He concedes that in a biography this short, there wasn’t room for minor details, especially when his successes were so plentiful. To Stephens, Webster’s advanced age, his early start in the profession of art, and the proliferation and reproduction of his works, all combine to make him one the most respected English artists of his time.