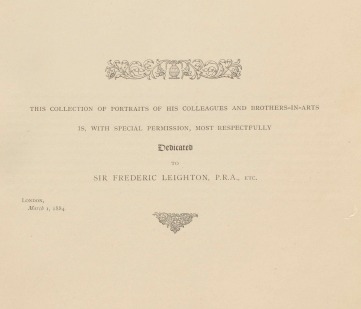 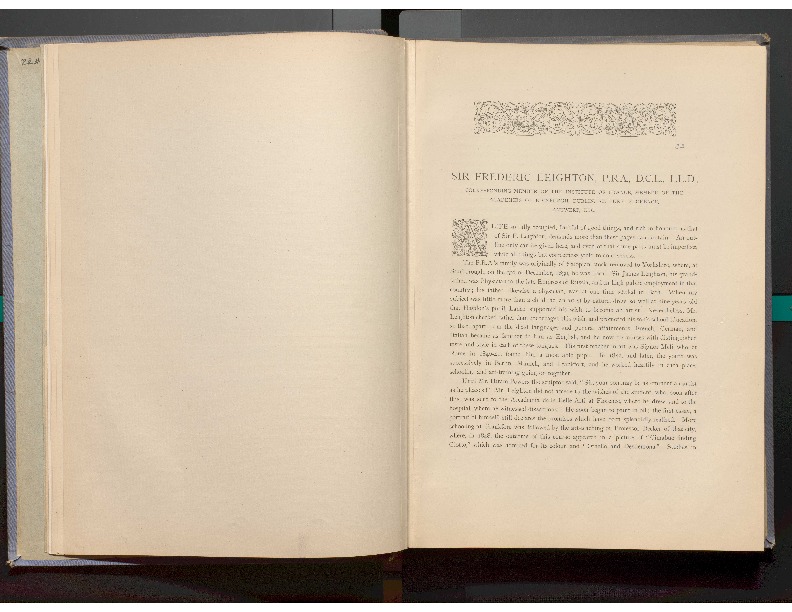 Although we can't know for certain who was responsible for dedicating Artists at Home to Frederic Leighton, it may have been the author, Frederick G. Stephens, whose admiration for the PRA shines through his biographical sketch, the first to be issued in 1884. He begins with a disclaimer:

A life so fully occupied, fruitful of good things, and rich in honours as that of Sir F. Leighton, demands more than these pages can contain. An outline only can be given here, and even of that some parts must be imperfect, while all things but correctness yield to conciseness.

Concision was never Stephens's forte, but he managed to keep his text to four pages, relying on the reader to be already well-versed in Leighton's illustrious biography. He tells of the artist's privileged past--his grandfather had served as physician to the Empress of Russia--and of his excellent education, which included not only "the dead languages" but also French, German, and Italian, "and he now discourses with distinguished taste and style in each of these tongues. He retails Leighton's artistic education, too, which took place in several of the capitals of Europe once the great American sculptor Hiram Powers had assured the artist's father--also a medical doctor--that he had a promising future in the profession. Relying for the facts on the recently published biography of Emilia Pattison (later Dilke), Stephens takes the reader through Leighton's peripetetic past, finding even in his earliest paintings "that fine quality in line which distinguishes every one of his works and is as precious as it is true."

Although Leighton studied in Florence and Frankfurt, Rome and Paris, he never forgot, or so Stephens tells us, "that he was an Englishman." It was, then, with a sense of nationalistic pride that he sent to the Royal Academy of 1855 the painting purchased by the Queen, The Procession of Cimabue's Madonna, "which carried all the learned world of art before it, established the honours of the painter, and showed what an Englishman could do on the highest levels of design." This early professional success did not prevent his cultivation of other gifts, "bodily and mental, aesthetic and social," which would of course bring him success as president of the Royal Academy.

F. Leighton, The Syracusan Bride Leading Wild Animals in Procession to the Temple of Diana, 1866. Of this painting Stephens writes, The magnificent success attending the display of this work proved even more than its merits, for it made known that, as all men of power before him had done, Leighton had educated his public.. 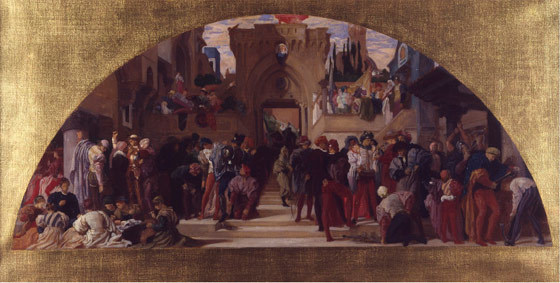 F. Leighton, The Industrial Arts as Applied to War, 1868--which Stephens describes as one of two great lunettes on the wall of the South Kensington Museum, which may well be taken for his masterpieces.

In his determination to downplay Leighton's cosmopolitanism, Stephens identifies his public commissions--a pair of fresco paintings for the South Kensington Museums representing "The Arts of War" and "The Arts of Peace"--as "types of industry and patriotism," as well as the artist's masterpieces. This judgment might well be debated today, as would his fulsome praise of the "Procession of the Daphnephoria" (now known as Daphnephoria) from the mid-1870s, which he described as "at once solemn, animated, graceful, and dramatic" and judged that it "marked the acme of successful genius, skill, labour, and research."

Stephens mentions Leighton's house in Holland Park, of which "much has been written, but not a word too much," his election to the presidency of the Royal Academy in 1878, followed by his knighthood; his appointment to the Standing Committee of the British Museum; and finally, his most recent honor, bestowed only a few days earlier, upon his retirement from active duty as commander of the Artists' Volunteer Corps: "a large richly-embossed silver bowl and a handsomely bound album inscribed with the donors' names."