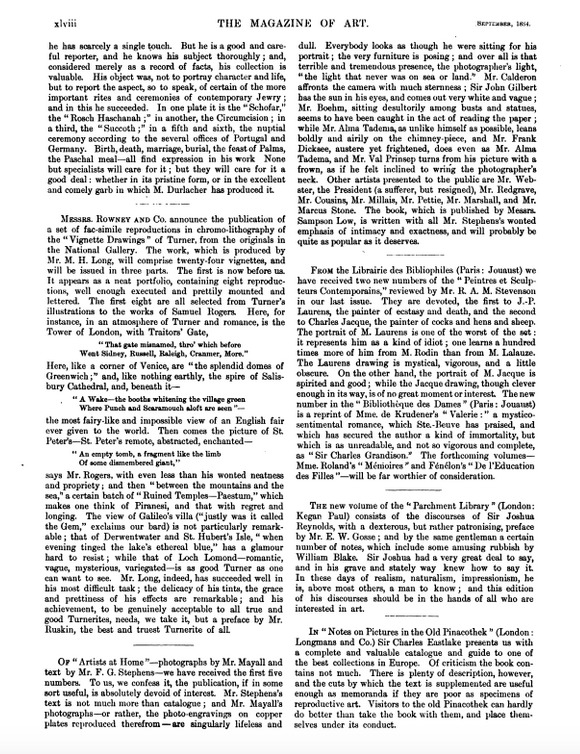 The earliest advertisements for Joseph Parkin Mayall’s series of photo-engravings, Artists at Home, circulated two months before publication began, to mounting fanfare. On January 12, 1884, The Athenaeum and The Manchester Times ran identical ads in anticipation of the Mayall publication. These newspapers referred to a serial work from the publisher Messrs. Sampson Low and Co. featuring photo-engravings made from photographs taken “very successfully” by J. P. Mayall. The series was originally titled Artists’ Homes, but in December 1883, just before Mayall’s images were published in facsimile, the release of another publication by that name–-a series by Maurice Adams with a similar vision--likely caused Sampson Low to change the name to Artists at Home.[1] These ads claim that “upwards of fifty studios” of “the leading painters, sculptors, architects and engravers of the day” had been captured by Mayall in preparation for the release in March of the first of twelve installments; not all the promises in these initial ads would be fulfilled.[2]

A month before circulation of the first installment, The Academy and The Athenaeum presented extensive features on Artists at Home, which at the time was set to include forty-eight artists, with other figures to be added "in due course.”[3] Just as important as the men listed as subjects was the man taking the photographs: the ad places J. P. Mayall in a position of honor, as having been permitted to document the artists’ private spaces. Moreover, he had photographed Prime Minister W. E. Gladstone in his library at Hawarden Castle. Mayall’s reputation was built up to generate excitement for the publication and to mark him as a gentleman-artist worthy of recognition and respect. The medium of the publication is said to be unique as well, given the “unquestionably permanent process of photo-engraving,” which made the series itself a lasting work of art.[4] The ads further reveal that the art critic F. G. Stephens would author biographies of the artists featured in each installment, tapping into a uniquely Victorian fascination with the lives of the artists regarded as celebrities.

The plan for the series was to release four photo-engravings with corresponding biographies each month, beginning in March 1884, in “no fewer than twelve monthly parts.”[5] Frederic Leighton, Thomas Webster, W. C. Marshall, and V. C. Prinsep would appear in the first installment: as Leighton was the President of the Royal Academy at the time, this was an impressive way to commence the series. The engravings were to be printed on imperial quarto-size paper, but the publisher planned a “Superior Addition on India paper, mounted on papier de Hollande, and of royal folio size”—necessarily a limited edition, with half the prints reserved for American subscribers, indicating aspirations for global recognition. The prints in the more luxurious option were priced at ten shillings and sixpence each (approximately $63 in American currency today), as compared to those in the standard installment, priced at five shillings each (around $30).[6]

At least one critic, writing for The Derby Mercury in late March, considered the series worth its high price. “The serial will be, indeed, as valuable from a literary and critical, as from an artistic, point of view. . . . The work, when completed, will be a veritable ouvrage de luxe, and it is one of which every lover of art will be anxious to become the possessor.” The same article includes a lengthy excerpt from Stephens’s biography of Prinsep, which describes in detail the artist’s home as captured by Mayall’s photograph, which may have generated additional interest in Artists at Home.[7]

In mid-March, an ad published in The Athenaeum announced that the second installment of Artists at Home would feature J. E. Millais, G. A. Lawson, Marcus Stone, and S. Cousins, and promised, like the previous ads, to show “the most exact and characteristic representations of eminent men, each in the habitat of his life, and in every sense at home.”[8] The ads became briefer, with less information, once the new monthly installments were announced. Between advertisements, several papers published notices of what Mayall had been up to--from photographing Lord and Lady Salisbury and the Duke of Argyll to a second round of photographing the Prime Minister, a portrait to be included in Artists at Home.[9] An August notice indicated that a similar series, Statesmen at Home, featuring a portrait of the Archbishop of Canterbury, was in the works, although it never materialized.[10]

Only six parts of Artists at Home made it into circulation, half as many as the initial ads had promised. We can only suppose that the series was not profitable enough to continue, although the photo-engravings were eventually published as a book. After April 1884, the ads made no mention of the proposed luxury, “Superior,” edition, but there is evidence that it became a reality. In 1918, a London rare book dealer, Henry Sotheran & Co., published a catalogue advertising Stephens’s Artists at Home--royal folio size, “with 25 full-page plates of the Artists in their respective studios, after photography by J. Mayall, proofs on India paper, cl., t. e. g.” The abbreviations indicate that the series was bound in cloth with top edges gilt. The publication, now a rare antique, was for sale at £3.13s.6d, the equivalent of approximately $188 today.[11]

[1] Maurice Adams, Artists’ Homes: A Portfolio of Drawings including the Houses and Studios of Several Eminent Painters, Sculptors and Architects, (London: B. T. Batsford, 1883).