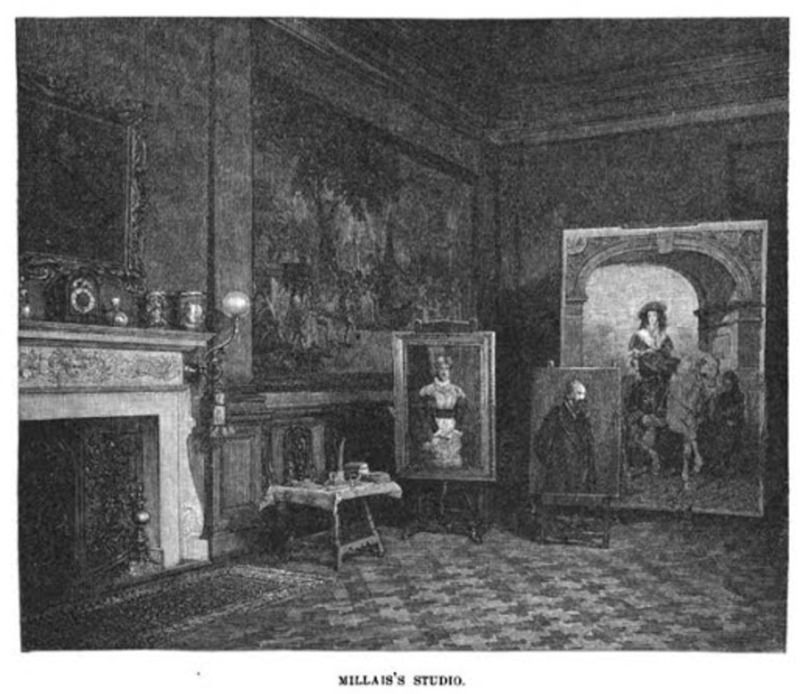 Joseph Hart, Drawings of Millais' Studio, 1883, from The Art Journal 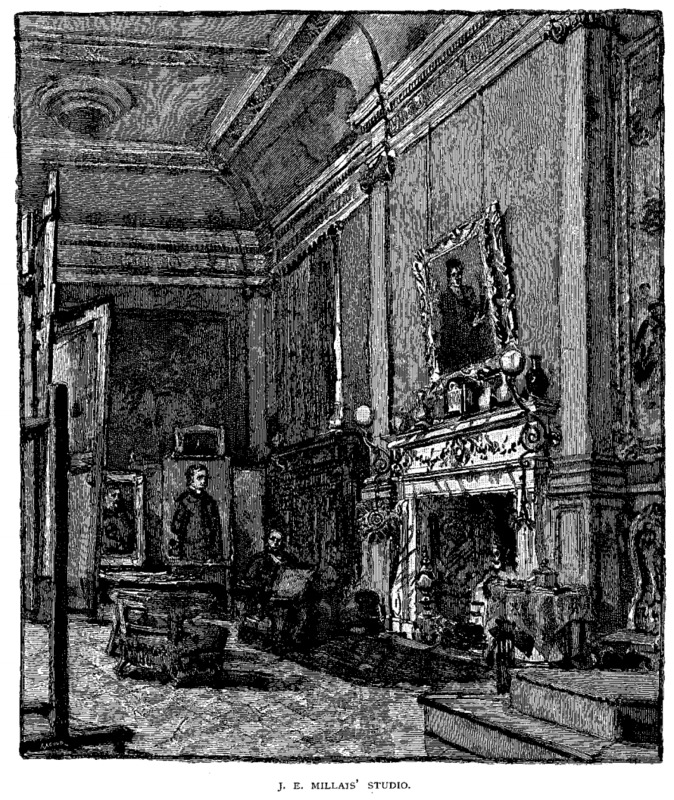 On arriving at Millais’s studio house to sit for his portrait, Thomas Carlyle is said to have remarked, “Millais, did painting do all that? Well, there must be more fools in this world than I had thought!”[1] Indeed, Millais spared no expense in constructing his custom-built studio house, which likely cost him approximately £13,400 (equivalent today to £1,474,000).[2] Millais purchased the site at No. 2 Palace Gate in March 1873, selecting the suburb of Kensington for his new home. Although not yet fully established, Kensington was rapidly becoming a colony for artists. This site offered not only large lots of land in an area that was still pollution-free, but also afforded him the ability to easily visit other artists, share props, and attract potential patrons.[3] Millais’s friend Philip Charles Hardwick (1822-1892) completed the designs for the house in 1873, and in 1876 the palace builders Cubitt & Co. finished its construction. Italianate in style, plain and “old-fashioned,” Millais’s house differed from the Queen Anne-revival style preferred in Kensington. Many of Millais’s admirers insisted that this style suited its owner. Walter Armstrong, for instance, wrote: “It is characteristic of the man, none of the thought-out quaintness of the Anglo-Dutch revival, but a great, plain, square house.”[4] And John Oldcastle noted, “The great red house at Palace Gate is above all remarkable for the absence of any kind of affectation.”[5]

The largest room in the house was Millais’s fifty-foot-long studio, pictured in the photogravure in Artists at Home. Although it appears as more a sitting room than a working space, complete with parlor furniture, Millais’s studio was in fact well-equipped to deal with the lifestyle of an artist. The photogravure begins to capture this functionality in the large pile of easels stacked next to the intricately carved chest, which once belonged to Charles I and was featured in Millais’s painting of Princess Elizabeth[6], but does not reveal the steel-roller shutters used to control light, the spiral staircase leading to a storeroom, or the system for moving large canvases. Equally important to the physical tools of his profession, Millais’s studio emanates elegance and provides evidence of the fine aesthetic taste necessary to maintain his high reputation. The oriental rugs and the marble fireplace lined with porcelain vases that are pictured in the photogravure, as well as the marble fountain designed by J. Edgar Boehm and the Sicilian marble floors that are not, prove that Millais had earned his status as “the nation’s most cherished painter.”[7]

[3] Joseph Lamb, “Symbols of Success in Suburbia: The Establishment of Artists’ Communities in Late Victorian London,” in Victorian Urban Settings: Essays on the Nineteenth-century City and Its Contexts, edited by Debra N. Mancoff and D. J. Trela (New York: Garland, 1996), 57–73.

[6] Cosmo Monkhouse, “Some English Artists and Their Studios,” Century Illustrated Magazine, August 1882, 7. Walter Goodman mentioned this aspect of Millais's studio in “Artists’ Studios: As They Were and As They Are—II.” Magazine of Art 25 (July 1901): 402: "As a general rule, artists here and abroad are not given to much decorative display, except in respect of the approaches to their studios and the objects they are in the act of depicting. Millais’s last painting-room—and he owned a number in his time—was remarkable chiefly for its vastness, its huge side-window of plate-glass, and its finely-carved chimney-pieces, over which hung a solitary old master, which the modern master greatly admired. But beyond a few pictures and a choice piece of tapestry, the chamber contained little besides implements of art and the artist’s glowing canvases." 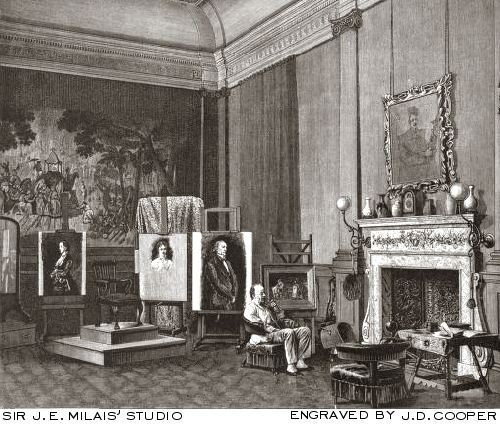 In his house, as in his pictures, Mr. Millais has discarded every affectation of art and knowledge. Neither the shadow of the pre-Raphaelite nor the intensity of the so-called æsthete disturbs the general air of unpretentious prosperity that characterizes his handsome house at Palace Gate. It might be the residence of an opulent merchant of good taste, so far as any special idiosyncrasies of style or appearance go, with the exception of that tall northernmost window that looks out upon the Kensington High-road, and that great “roomy” studio which it lights within. A magnificent apartment is this same studio, worthy of the man and his art—a lofty, spacious, impressive room, its dull red walls literally covered with tapestry. The mantel-piece is a block of carved marble. Above it hangs a portrait by Murillo. A polished floor amply covered with soft carpets and rugs; a few cabinets; a platform for models; a majolica pedestal for vases or flowers; a blazing fire on the hearth, the light of which dwells lovingly upon a rich rug—and this is the famous painter’s workshop. How the painter’s appearance and manner were characteristic of his work would have struck the most careless observer. A frank, robust, fresh-looking English gentleman, above the medium height, sturdy of build, broad of shoulder, a complexion suggestive o breezy downs and hills a rich mellow voice, and a manner that of a country lord, master of fox-hounds, and owner of a thousand acres in the Midlands. 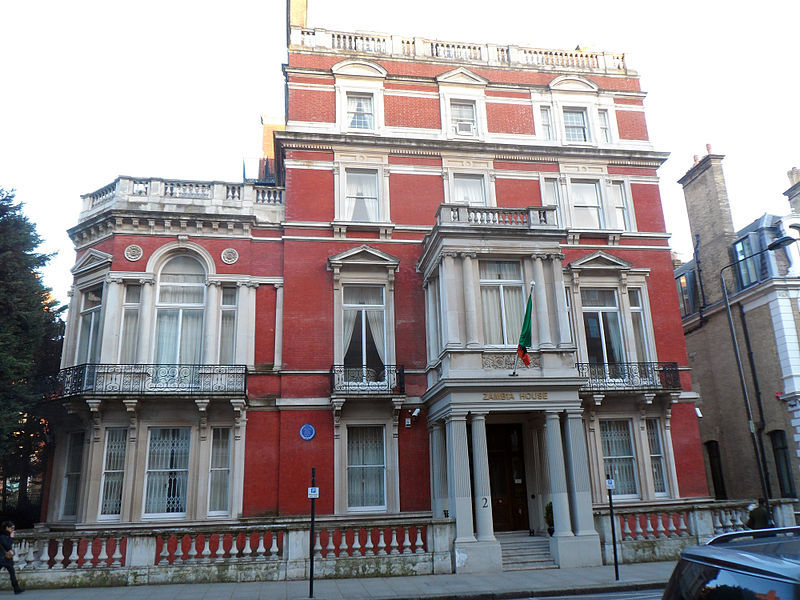 In the 1950s, in preparation for a book on the Kensington borough of London, William Gaunt visited No. 2 Palace Gate and found the interior dramatically altered from its storied nineteenth-century state:

The house as it is now, unaltered outside, retains within no reminder save in its proportions of its original occupant. The staircase is still impressive but the Boehm sea-lion has gone, the rooms have been converted to office use, the building is now occupied by the Pakistan Embassy, one of its officials seeming puzzled by a visit from the writer and unaware of working in a house where Gladstone and Beaconsfield, Tennyson, Newman, the Duchess of Westminster, Lily Langtry and so many others of Victorian fame had once sat for their portraits.

Presumably little has changed since then, although the Zambian High Commission has occupied the building since 1983.