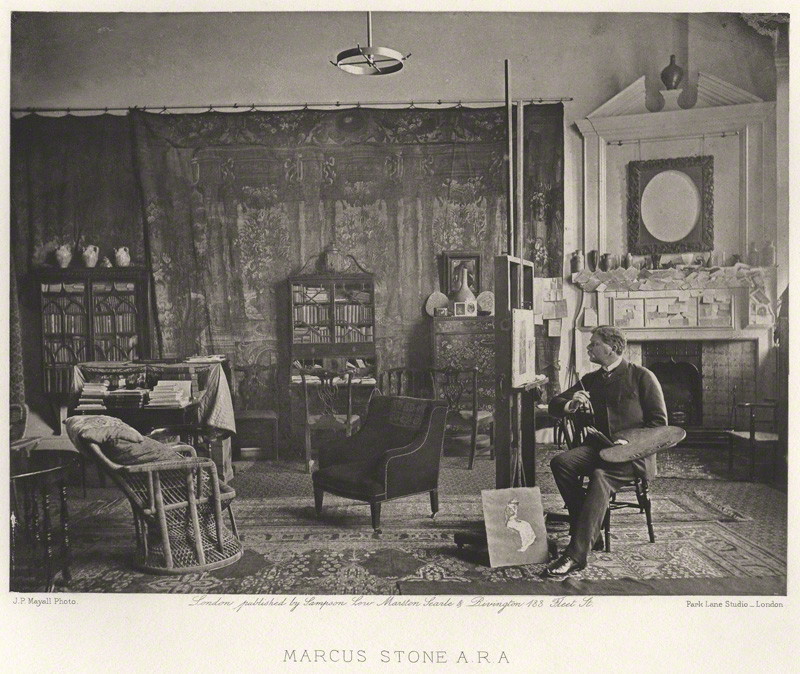 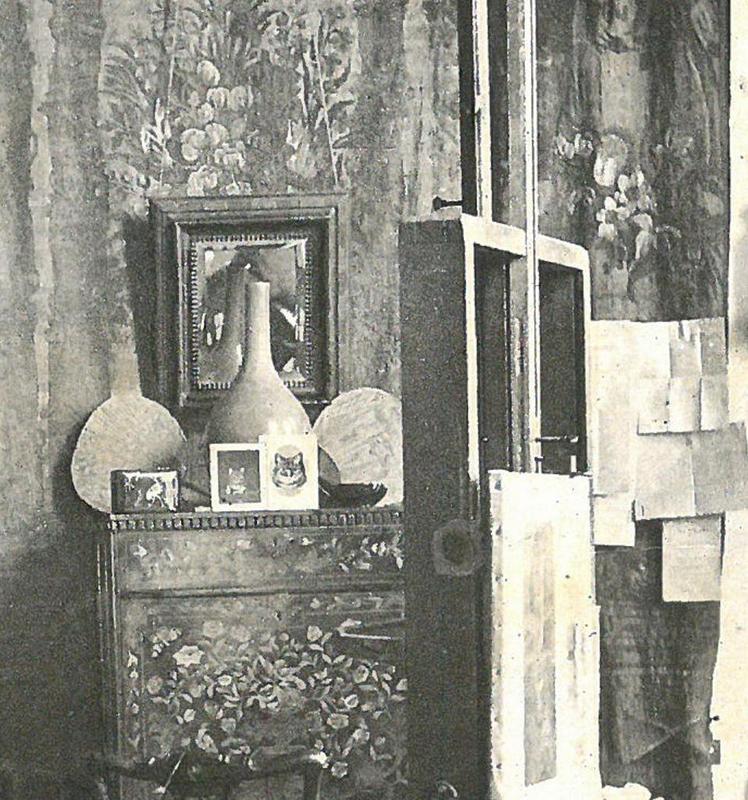 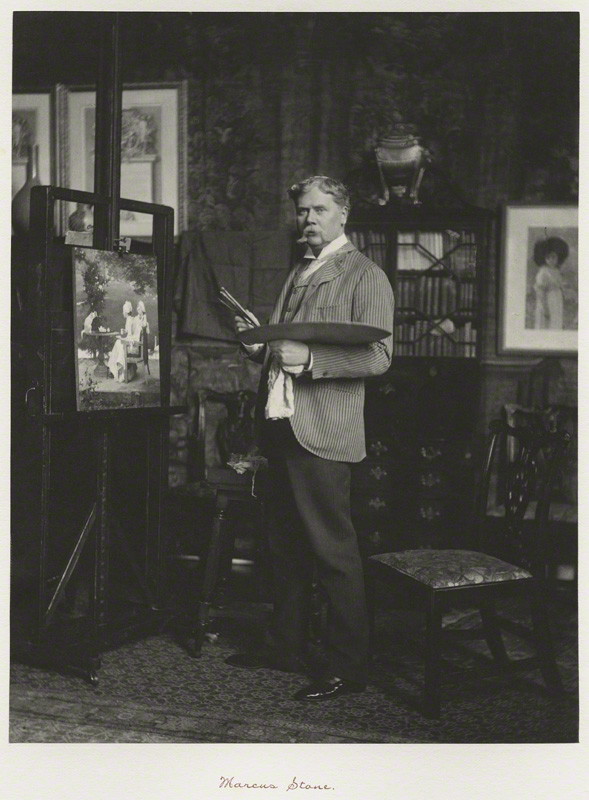 Photograph of Marcus Stone by Ralph W. Robinson, 1892, showing the artist in the same studio.

Marcus Stone sits in a wooden chair holding a palette and brush. He is poised and upright, focused intently on the canvas displayed on the easel before him, which we are unable to see. His steadfastness is shown in his elegant suit and well-polished loafers, one of which he extends, in a relaxed manner, towards the viewer, drawing attention to an unfinished painting at his feet;the canvas appears to contain the image of a woman in a hat seated in a pose quite like that of the artist himself. On the floor is an array of patterned rugs. The one nearest the viewer has been partially covered, indicating that Stone is seated in the studio of the house he built for himself and his wife at 8 Melbury Road, Kensington. The cover is likely there to protect the rug from Stone’s paint as he studies the surrounding props for his genre paintings; or it may be there for Frank Dudman, the photographer working for J. P. Mayall, to stand and mount his supplies on while the photograph is taken.

Behind Marcus Stone is a fireplace adorned with the artist’s notes and sketches, nestled below the pottery and small urns on the mantel. Notes even sprawl onto the grand tapestry on the wall, which dominates the interior scene. According to the artist himself, the tapestry is from a time “before Shakespeare was born,” and depicts classical Greek columns and lush greenery and garlands.This complements the floral pattern on the bureau behind and slightly to the left of the easel. Two fans, a small study of a feline, a lacquer box, and a ceranuc vase rest atop the chest. The neck of the vase is reflected in a framed mirror behind the collection of objects (perhaps the eighteenth-century looking glass he mentioned in 1899, creating the impression of a still life painting.[1] Shelves are stuffed with books above a desk strewn with papers; a second bookshelf with glass doors showcases more volumes; and a second desk is piled high with neatly placed books. A piece of cloth is affixed to the edge of the desk – perhaps what Stone is painting on his canvas.

Four wooden chairs, an upholstered armchair, and a wicker chair occupy the middle of the room, suggesting that Stone may have had many visitors to his home-studio – other artists, models, critics, family members, maybe even members of the public. However, there are no finished or nearly completed paintings by the artist on display. In the 1899 interview with The Strand, Stone says, “It really distresses me to have people looking at my work,” although he did enjoy entertaining.[2] With ample furniture, the room still appears airy and grand: the ceiling we can see in the upper right-hand corner suggests the height of the space. Stone’s studio was situated on the upper level of his Kensington home and occupied nearly the entire floor. Three large oriel windows let in the maximum amount of light for the artist to work. In this photograph, the windows appear to be behind the artist, creating a striking highlight on his shoulder and illuminating his canvas.

This portrait of Marcus Stone was published in the April 1884 installment of Artists at Home.