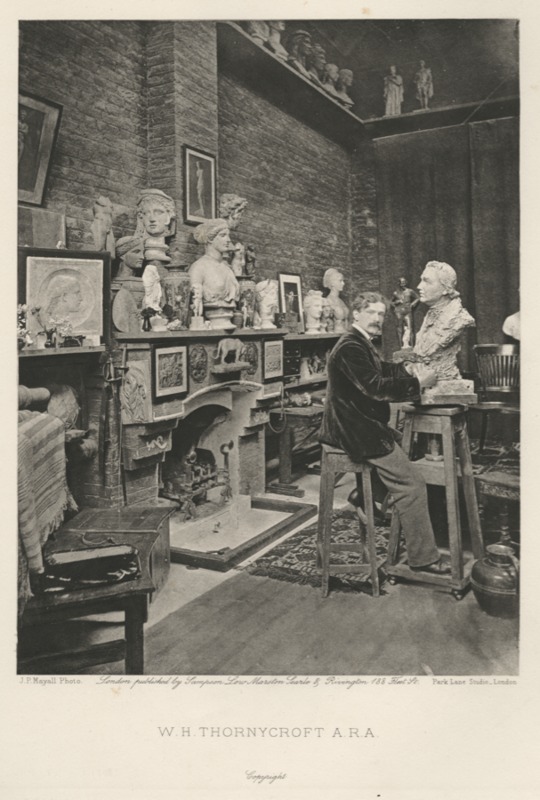 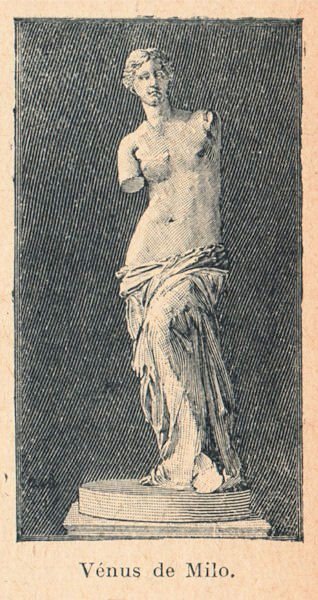 After visiting the Louvre during his student days, Thornycroft wrote a single comment in his journ: "The Venus of Milo, beyond all ideal."

This portrait of Sir William Hamo Thornycroft (1850-1925) was taken by Joseph Parkin Mayall (1839-1922) in 1883, then published in the June 1884 installment of Artists at Home. Set in Thornycroft’s house at 2a Melbury Road, Holland Park, designed by the architect John Belcher (1841-1913) around 1877, the photograph shows the interior of the artist’s studio, with Thornycroft tending to one of his works. The thirty-four-year-old sculptor assumes the role of a working artist, despite the elegant velvet jacket that he wears, an unlikely costume for an artist at work. The photographer creates the fiction that the viewer is interrupting the artist as he plasters a bust, apparently of the English Romantic poet Samuel Taylor Coleridge (1772–1834). His studio, or “sanctum,” is cluttered with classical marble busts and framed works alluding to Thornycroft’s sojourns abroad, where he gained his admiration for the antique from artists such as Michelangelo.[1]

A tall, imposing figure with fiery red hair, Thornycroft sits on a stool, gazing curiously at the camera. Although Thornycroft is the subject of the portrait, he hardly seems alone in his studio, where he is surrounded by busts so lifelike that they seem to populate the room. A number of his own artworks are on display, yet the space appears more like a living room than an artist’s studio due to the prominent fireplace, oriental rug, and personal possessions such as swords and vases; Thornycroft’s piano and a violoncello are not visible in the photograph. In designing the studio, Thornycroft favored comfort over aesthetics, which could explain the oriental rug on the floor and the addition of curtains, adding an element of “homely” warmth, if not exactly practical in a place where wet plaster is applied to sculpture.[2] The space appears a cluttered mess at first glance, but upon careful examination we realize that each sculpture and framed picture has a purpose. 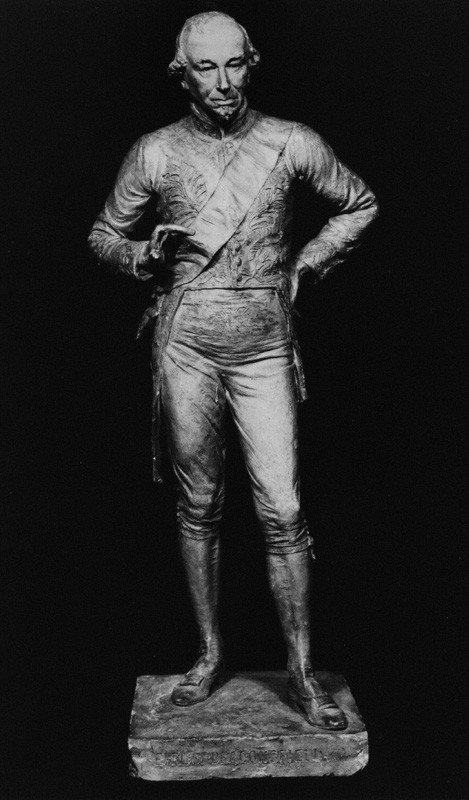 Much of what we see in Mayall’s photograph was present when Wilfred Meynell visited Thornycroft’s studio in the early 1880s. Meynell, like Mayall, recognized the significance of the fireplace, designed by Thornycroft himself. It was there, on the hearth of the studio, that the sculptor "accumulated his Penates," as Meynell puts it, referring to the objects most "sacred to the house-owner." On the fireplace itself, framed photographs of the Elgin Marbles, "the chief masters in his art," hang on either side of a cast of a tiger that had been part of a Bacchic Procession destroyed in a fire. Atop the mantel are displayed Thornycroft’s favorite antiques, "to keep his eyes fresh," in an arrangement crowned with a framed photograph of the Venus de Milo. Below it stands a copy of the so-called Oxford Fragment--the bust of a goddess, probably Demeter, from around 500 BC, flanked by the torso of the Cyrenian Aphrodite and "the so-called 'Hera' of Kensington, with her placid, archaic, curiously thoughtful beauty."[3] There are, in addition, a number of works by Thornycroft himself, including a bronze cast of the original wax sketch and a full-sized bust of Teucer, a miniature bronze of Athlete Putting a Stone, and a statue of Lord Beaconsfield (Benjamin Disraeli) standing before the drapery at the back of the room.[4]

Although there were three or four studios in the Thornycroft household, in Mayall’s photograph Hamo sits in his personal studio, separated from the other creative minds of his artistic family. Marking his private territory, he placed a horseshoe over the door as a good-luck charm. Sketch models for all his principal works are scattered about the room, but several works by his grandfather, father, and mother are also present. Although Thornycroft’s studio appears to be a dark and masculine space, the sculptures by his mother, the artist Mary Thornycroft (1814–1895), and the fireplace designed by his sister Helen Thornycroft (1848–1937), a professional painter and watercolorist, imply a female presence that is often masked in the other studio portraits in Artists at Home.[5] Thornycroft retains close family ties with his mother and sister by keeping their works company in the studio, though the uninformed viewer would never know of their presence. 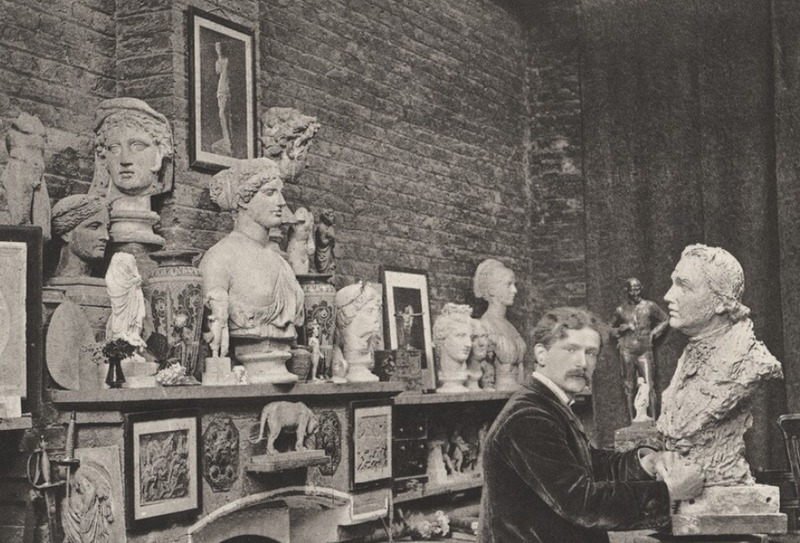